Hunter of Stories by Eduardo Galeano 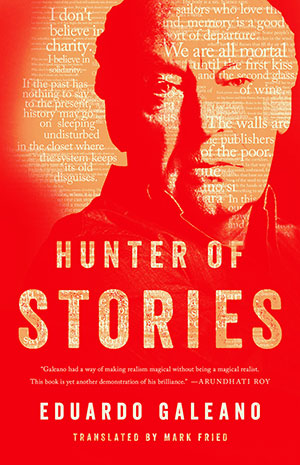 In 2015, with the death of Uruguayan writer Eduardo Galeano, Latin America lost one of its finest literary voices and one of the staunchest critics of the exploitations of its people and resources for over five hundred years. During a life spent largely in exile, fleeing military regimes in both Uruguay and Argentina, Galeano wrote books that earned his reputation as an outstanding author of the “Boom” generation and a prominent opponent of capitalist and colonial policies. His most famous work, Open Veins of Latin America (1971), traces the story of colonization from the arrival of Europeans in the “New World” to the brink of the Uruguayan military coup whose leaders banned the book in 1973.

Hunter of Stories is Galeano’s last work. It contains over two hundred pieces of writing, none of which exceed two pages, representing the final phase in a lifelong project of documenting the realities of Latin America. Galeano does not tell new stories; instead, he unearths and retells stories from other sources, recombining them to form a collection that is readable in any order. He shares stories from Latin America’s colonial and recent history—along with many tales derived from indigenous cosmovisions—to present a portrait of the region’s past that uncovers the powerful forces behind its present. The brief texts function simultaneously as short stories, history lessons, and moral aphorisms, and the book reads quickly thanks to Galeano’s simple yet revelatory language, rendered into English with elegance and precision by translator Mark Fried.

Hunter of Stories affirms three truths that define a measure of Galeano’s legacy. First, “social” writing is not always artistically unambitious; in the right hands, it can reach the same heights sought after by the most “literary” of authors. Second, important messages can be communicated in small spaces. And third, sometimes it is better to retell old stories than to invent new ones. Galeano proves that we must look to the past and consider the circumstances that made us who we are in order to understand the present and plan for a brighter future.

All told, Hunter of Stories is a fitting bookend to Galeano’s impressive literary career and a necessary book for all those who, like the author, care for the suffering of others and believe in the power of words to change minds and, perhaps, the world.