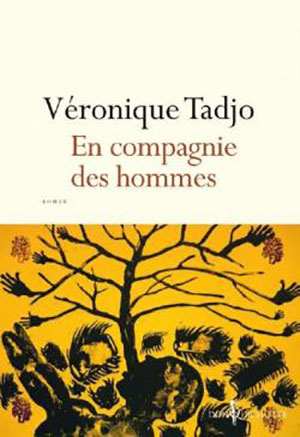 With En compagnie des hommes, Véronique Tadjo brings the 2014–2016 Ebola crisis into sharp focus, reminding us that it is still very much a threat to the future of humanity. The award-winning Franco-Ivorian poet, novelist, and painter intertwines facts, well-known songs, legends, poems, fictionalized testimonials, and documentary prose in the stirring orality of this novel to give voice to the humanitarian disaster and to interrogate Ebola’s historical and biospheric currency.

The novel opens dramatically with a father instructing his daughter to go to her aunt in the capital and not mention the deaths in the village. Narratively, her silencing gives the floor to nine other characters who, chapter by chapter, recount their encounter, infection, and engagement with Ebola. Anonymous as in the tradition of oral legends, some seem familiar, recognizable from news coverage of the outbreak. They stand in as the doctor, nurse, gravedigger, mother, daughter, local government representative, foreign NGO volunteer, grandmother, fiancé, and the Congolese researcher who discovered Ebola. There are survivors and victims, those treating and preventing the disease’s spread, and those turning to traditional healers.

Framing these autobiographies are the personified discourses of the arbre à paroles, the ancestral Baobab, who has spread his branches wide to hear these accounts of living with Ebola; the voice of Ebola explaining his viral capacities and railing against the human race for letting him travel out of the forest; and the response of Bat denying her responsibility in the spread of the disease, who affirms her hybridity as half mammal, half bird by recounting how she was born from the love story of a dove and a fox.

With no typographical speech markers, the first-person discourse of the characters melts fluidly into descriptive, narrative, poetic, and factual texts. Realistic, painterly, and poetic, the impeccably structured polyvocal novel registers the urgency, despair, commitment, dedication, and solidarity that Ebola provokes and leaves one at times shivering, wanting a scrub-down in a chlorine bath.

Recalling Ken Bugul’s Le Baobab fou (1982), Baobab affirms the essential role of trees in the history and future of the world. As arbre à palabres, he listens to the contemporary voices and remembers the elders’ confidences and discussions of matters of justice and survival under its branches. As arbre à paroles, the symbolic tree expresses the hope that lessons have been learned to prevent another deadly Ebola outbreak. Ancestrally wise like Tadjo’s urban Mask in Le Seigneur de la danse (1993), the sacred tree draws on the Congolese researcher’s understanding of the universe and Bat’s advice to accept the world’s biodiversity to suggest a pact of mutual goodwill between humans and nature in order to preserve the planet’s well-being. Using Ebola as exemplum, and refuting simplistic explanations about the dire epidemic’s source with Baobab’s wise and cautionary storytelling, Véronique Tadjo's En compagnie des hommes draws up a polyphonic ecological fable for the twenty-first century.