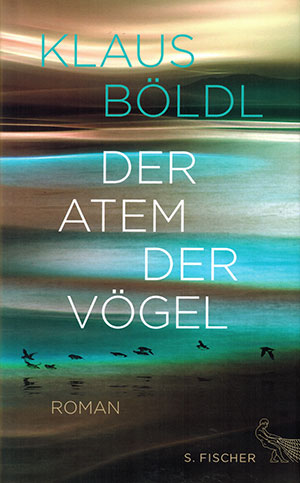 In Klaus Böldl’s latest novel, Der Atem der Vögel, the narrator, Philipp, came to the Faroe Islands in the North Atlantic between Scotland and Iceland two years ago, prior to the story’s beginning, to restore medieval church furniture. This windswept archipelago is characterized by endless horizons, impressive natural spectacles, a harsh climate with constantly changing weather, colorful houses with grass-covered roofs, rainbows, countless sheep, and far fewer human beings. Early on, Philipp meets the local pediatrician, Johanna, and her daughter, Rannva, decides to stay with them but now sees their relationship on a downward slope. While his girlfriend and her daughter are away visiting relatives in Denmark, Philipp passes time on endless walks with a mind keen on minute observations and fragmented memory pieces reminiscent of the ocean’s vast expanse.

Although lacking in plot and dramatic twists, Böldl’s prose in Der Atem der Vögel is captivating, with its hypnotically quiet and meditative narrative stream. As in a dream, the Faroe landscape and the memories of Philipp’s childhood—especially of his best friend, Simon, who vanished without a trace at the age of fifteen—blend together and seem to be the ingredients of a longing for his own disappearance. Aimlessly, Philipp passes the days with forays into the Faroe Islands’ small capital as well as hikes on rugged dirt tracks and lonesome roads, through river valleys and quiet moors. Where does this path into the Never end? Böldl’s oeuvre is populated with characters like Lennart (Der nächtliche Lehrer), Johannes (Studie in Kristallbildung), Harald (Südlich von Abisko), and now Philipp, who retreat to the barren landscapes of the cold European North to escape the world, to be absorbed in nature, or to redeem themselves. Their development is accompanied by sentences of slow and subliminal rhythms and resonance as well as an appeal to melancholy.

By the end of this slim volume, it seems as if Philipp’s wanderings might never end, as if he would walk forever, deeper into the landscape in order to become one with it and finally disappear into his own self. What remains in the final pages of Der Atem der Vögel is a nature with no need for Homo sapiens. As a result, Böldl arrives at quietness—and a long, majestic reverberation in the reader’s mind.