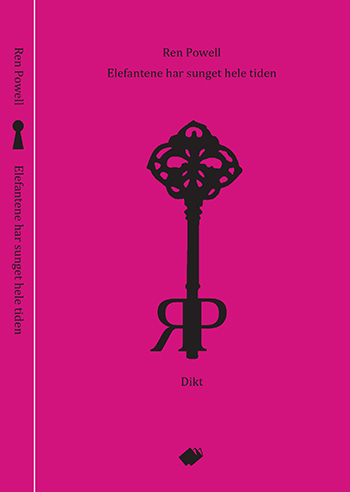 A California-born poet, nonfiction essayist, translator, dramaturge, and teaching artist, Ren Powell is today at home on the west coast of Norway. Complementing six books of poetry and more than two dozen book translations, her poems have been published in six languages and her dramatic works performed in the US, Canada, and Norway. Her latest bilingual book, with its untranslated introduction in Norwegian, confirms the broad recognition she has received in her adoptive country. Already known for her vivid imagery, fluid poetic structure, and focus on women’s cultural traditions, she continues to tell essential female stories.

The Elephants Have Been Singing All Along is a manifesto about middle-aged women, a circular story rooted in the beginning and the end of a woman’s life-giving time. The protagonist is the body; its resistance to tell its story reduces the poems to mere palimpsestic announcements, to a genealogy of the story that nonetheless teases out the body’s relationship with the mind, senses, nature, space, and time. Perhaps it is this birthing process that the singing elephants are accompanying.

The book’s first part is devoted to searching for the body and framing it in a geometrically defined space closed by the “Once upon a time” that begins and closes each of its life phases. The body is examined in its substance and density, through the skin’s “geography of aging” and through the paradigm of beauty, this “choreography of doubt and faith and compounds.” The body is both particles and waves, as in quantum physics’ double slit theory. It takes leave of the concrete; untethered, it waits for its journey of discovery, sensing the “ripple in the surface tension” that precedes earthquakes. Triggered by temporal or verbal shifts (as in the italicized text on page 22, which is an echo of earlier poems), the poems are likewise fragmented particles and smooth waves that displace mental boundaries.

The second part of the book is dedicated to following and defining the new body as connected to a myriad of micro-organisms, part of a vast universe in which it vibrates “like the cicada’s haunting buzz.” The body becomes an illusion and memories are a choreographed dream of paradise, ready to discover itself. The nine poems of the third and final part of the book chronicle the body’s journey through an initiatic door, a glorious passage to freedom, immateriality, balance, nothingness, and immortality. No longer needed, the story disappears. The open-endedness of the search and the alternance of fragmentation and connectedness tell the phenomenology of aging effectively, albeit indirectly in a poetic farandole that paints a mythical tableau of womanhood.