A Working Woman by Elvira Navarro 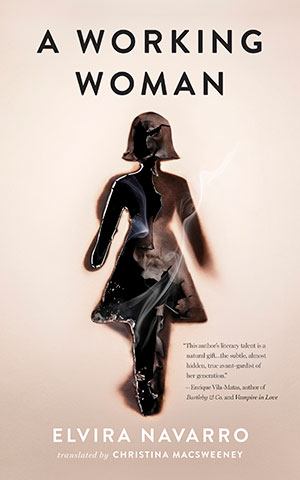 Elvira Navarro’s latest novel hinges largely on two questions: How do we know we’re being told the truth, and how does that lack of certainty influence the way we interpret information presented to us? In this thin and seemingly slow-paced work, she picks apart our understanding of reality and reliability, challenging assumptions of the truth while examining the nature of friendship and life in urban spaces.

Elena is a young and educated publishing professional who finds herself struggling financially after being downgraded from a contract employee to an independent worker. Struggling to make ends meet, she takes in a roommate named Susana, who has just returned to Madrid after years of living abroad. The two women get off to a rocky start, with Susana’s quirks and elusive behavior underscoring Elena’s sense of isolation. Eventually the two reach a level of intimacy by nature of their proximity, a growing domestic warmth that is juxtaposed against Elena’s frequent observations of the changing city around her. Living on the margins of the lower middle class, Elena notes the economic hardship sweeping the city and changing the way people live.

But while the story feels straightforward, there’s more to it than meets the eye. The novel opens with a brief story Susana tells Elena, about a period of poor mental health and the intense sexual encounters she sought during that time. Susana is positioned as an unreliable narrator, with Elena interjecting to speak directly to the reader about her misgivings and to share personal asides. The dynamic, which carries over into the Elena-narrated bulk of the novel, is clear: Elena is trustworthy, while Susana might be exaggerating or flat-out deceitful. But a twist later in the novel challenges the perspective from which the reader has approached the narrative, making a simple story a deeper meditation on the way we give our trust to those who tell us stories.

Written in a unique voice that evokes the alienation Elena feels so deeply, Navarro’s novel is a complex yet not overwhelming work that deals as adeptly with relationships between people as it does with the relationship people feel to their cities and their work. Pinning it all together with subtle effectiveness, the larger questions the book raises are pleasantly jarring. Taken as a whole, the novel is thoroughly gripping.