The Hole by Pye-young Pyun 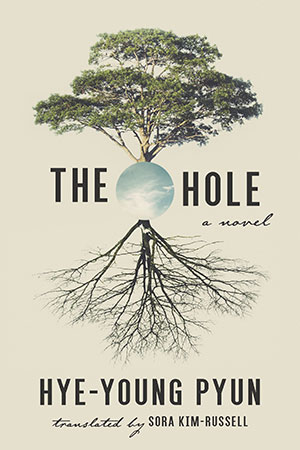 The Hole, by Hye-young Pyun, one of South Korea’s most notable writers, embarks on an intriguing premise. What happens when a successful life is destroyed after a terrible accident? And if the responsibility for this accident lies with the sole survivor: the dead woman’s husband? These complex moral questions drive the novel to its dark, fearless end.

Oghi is a tenured professor, a self-made man who has married well. He is also a fraud whose marriage was loving but fraught and whose professional work was more sensational than substantive. Likewise, The Hole initially appears to be about mourning and recovery after Oghi’s car accident results in his wife’s death and his total-body paralysis, but quickly surprises by becoming a story about Oghi and his mother-in-law. This relationship of mutual respect becomes fraught and unpredictable after the accident, following revelations concerning Oghi’s marriage and the growing inequality between bedridden, utterly dependent Oghi and his physically capable mother-in-law.

The Hole is rooted in character but has the suspense of a thriller. Obstacles continue to impede Oghi’s recovery: his original live-in caretaker is crude and sometimes cruel, his physical therapist is fired for being unaffordable, and his surgeon has an accident so Oghi’s upcoming surgery is postponed. These new, changed circumstances are dictated by or communicated to Oghi through his mother-in-law, whom he no longer trusts.

The relationship of inequality is not new to Oghi. He notes, “The forties were ripe for sin. And there were two basic reasons: either you had too much, or you didn’t have enough. In other words, the forties were when you find it easy to do bad things out of power, out of anger, or out of feeling left behind.” This speaks powerfully to the condition of socially divided Korean society and industrialized nations in general, where violent unrest often masks the problem of inequality: who has power, and who is abused by that power? Oghi once wielded such power but now finds that power used against him. Even the vines covering his windows seem to invade and swallow up his view, reinforcing his prisoner status.

Holes, literal and metaphorical, proliferate in the novel. Some holes, beyond Oghi’s larynx, are gaps in memory due to the accident. As Oghi begins to remember, mourn, and relive his wife’s talent and frustrated dreams, he begins to understand the “cavity” that her life had been for her. Other holes for Oghi are ones of knowledge; each family is a troubled, unknown geography. He contemplates the hollowness of secret, lost love in the endless months of rehabilitation and neglect; he learns that his most dangerous secrets might no longer be secrets to his mother-in-law. Though Oghi knows that his mother-in-law is half-Japanese, a kind of “foreigner,” he does not understand that her utterance Tasukete kudasai means “Save me,” or why the greater his success, the more he had felt he was “continuously losing something.”

The novel’s greatest hole is the mystery of being human over the long cycle of life. As Oghi thinks to himself, “To be human is to be saddled with emptiness.” Through revealing the holes haunting the three characters’ lives, the novel builds toward its chilling climax. The Hole is for readers who are unafraid of knowing that our life, and our loved ones, are strangers to us.