The Dreamed Part by Rodrigo Fresán 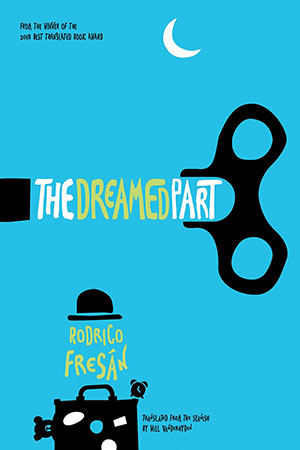 In Rodrigo Fresán’s The Dreamed Part, one of his book-besotted characters spends many hours rereading a single story, a “mad and wise” tale that evokes “the uncertain texture of a fever dream.” These same words could be used to describe the Argentine author’s smart, circuitous book. Though this is essentially a novel of stories within stories (within stories), Fresán evinces scant interest in traditional plot development. Instead, he’s written a genre-straddling opus that combines elements of science fiction, biography, and literary criticism. At near 550 pages, this book requires commitment and a willingness to accompany a restless writer as he navigates a multitude of narrative pathways.

The protagonist of The Dreamed Part made his first appearance in Fresán’s capacious The Invented Part, which was published in the US in 2017. An unnamed novelist with a metaphysical death wish—he once hoped to throw himself into the Large Hadron Collider in Geneva, merging his body with the cosmos—he reintroduces himself here as “an ex-writer.” He’s a longtime insomniac, which all but destroys his ability to work.

By design, the ex-writer’s firsthand experiences are comingled with his intricate interior monologues. This imbues the novel with an appealing ethereality—and keeps us guessing. The opening act, for instance, takes place in a dimension where dreams are bought, sold, and studied at a scientific institute called the Onirium. Are we meant to understand this as an actual representation of the world the ex-writer inhabits? Or is this one of the sci-fi tales he penned before he stopped writing? Either way, Fresán’s novel is a fascinating literary puzzle.

The Dreamed Part is also an attentive character study of siblings, whose lives in the real world are secondary to their relationships with books. The ex-writer may be the novel’s ostensible lead, but his sister, Penelope, the author of popular novels about three sisters who live on the moon, is just as central to the proceedings. Fresán gives us a glimpse inside Penelope’s books, and for a couple of chapters, we follow along as the Tulpa girls move across a lunar landscape that’s being transformed into “a stage for future reality shows and for Olympics and for movies that take place on the Moon and, then, with special effects, for movies that take place on Earth.”

Soon, though, Fresán pulls back and focuses on the Tulpas’s creator. Penelope, we learn, has loved Wuthering Heights since she was a child, and she’s modeled her Tulpa trio on Emily Brontë and her sisters, Anne and Charlotte. Overworked and beset by intense personal ordeals, Penelope retreats to a “wellness monastery,” revisiting her favorite novel and ruminating on the Brontë’s complex personal lives.

At this point, about midway through The Dreamed Part, Fresán moves into lit-crit mode, devoting numerous pages to an eccentric analysis of the characters in Wuthering Heights and explaining how their traits can be seen in the Tulpas. Heathcliff, for instance, is “a possessive obsessive,” and “Nelly Dean is a sharp-eyed voyeur” who, like Penelope’s characters, knows how to parcel out information about her rivals. This kind of narrative detour isn’t for everyone, but give Fresán credit for his inventiveness and fluency. He writes equally well about famous novels and those that exist only within his fictional universe.

Fresán takes another chance in the book’s final act. Here we return to the travails of the ex-writer, whose sleeplessness affords him endless hours to think about his literary influences and his abortive attempts to publish something substantial. Written in a stream-of-consciousness style, this section is overstuffed with ideas and walk-on characters. There’s a cameo by David Foster Wallace, a reflection on the paradoxes of modern technology, and a funny, moving sketch for a novel about Vladimir Nabokov, which the ex-writer knows he’ll never complete.

Though it would be futile to try to isolate a unified theme, The Dreamed Part is clearly about narrative itself, the way that stories help us understand ourselves when nobody else will listen. This is a difficult novel, and Fresán knows it. Near the end, the ex-writer complains about journalists who ask him to “summarize ‘his subject,’ to help them do their job, and keep them from having to read” his work. Consider it an in-joke, reserved for readers who make it through this long, intelligent book.