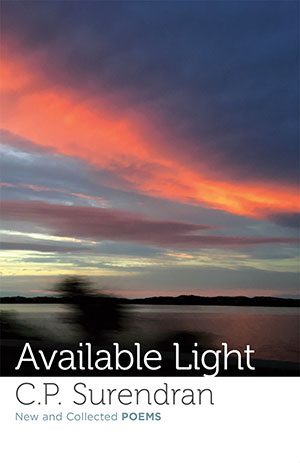 C. P. Surendran is, in many ways, a shadowy figure in Indian English poetry. He doesn’t dwell under the blazing lights of ill-deserved fame but in a dark space where people would “find me on the edge / dangling my feet in air over the same window ledge.” From this precarious perch, he catches the world in the failing light.

Available Light, a compilation of his “new and collected poems” in one grand volume, is an apt title to describe that vantage point and that somber vision. Like a drowning man clutching at a straw, he aims for that last grip on the last rays before they settle into a dark mass of an arctic winter. It’s also a rush to capture a fading image on camera before the object and observer are lost forever.

Light that almost goes missing pervades his poetry, the earliest or new. Light for him represents the passage of time: “When we are done with the nature of light, / . . . the evil it does / To mass . . . / We are left with Time.” He writes about how “In my sleep the trees whirled / And leaf by leaf light emptied” or asserts that “To catch the evening light, / You need a van Gogh.” Sometimes, he wants to “draw the blinds / So that the sun couldn’t spot him.” But it turns ominous when he writes, “Tomorrow, at first light, I’ll cut my wrist.” Yes, he finds some “posthumous value / Of suicidal art / When the lights went out.” At times, the visual is harrowing when he spies children under a bridge “In rows like matches in a box / Waiting to flare at the sun’s first stroke.” It turns explosive when “She lights a cigarette / With a match that might set / The house on fire” or ordinary men “make peace, tossing a bomb / In the living room.”

This is poetry about losses—the loss of love, light, and time. Honest to the core as a poet, Surendran doesn’t paint for fear of being painted over but employs a burning match to etch his poems on his skin. A badly scarred poet is he.