The Eight Mountains by Paolo Cognetti 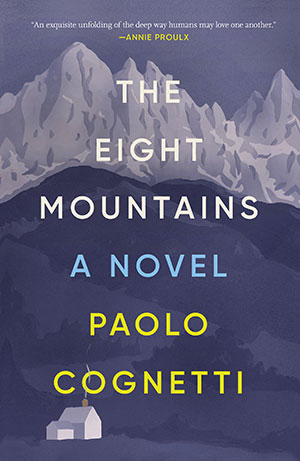 With over thirty foreign rights sales, this first novel has won the 2017 Strega, Strega Giovani, and the Prix Médicis étranger. Beyond its mountain setting and understated portraits of a dysfunctional family and a complicated friendship, The Eight Mountains constitutes a moving meditation on man in time and nature. In its epigraph, Coleridge’s Ancient Mariner exhorts the Wedding Guest to love all creatures, but this novel more closely echoes early Wordsworth.

The sotto voce of Paolo Cognetti’s first-person narrator, Pietro Guasti, a rootless documentary filmmaker, imbues his tripartite history with nostalgia—the bittersweet pain of homesickness that can bring insight. Before part 1, an unnamed chapter hints at the Guasti “foundational story,” which haunts Pietro’s family like the mariner’s albatross. His father, Giovanni, survives an Alpine avalanche that kills his best friend, Piero. When he and Piero’s sister wed, her family ostracizes them. Relocated to Milan, they summer in a tiny Alpine village, Grana, where Giovanni transforms from brooding loner to energetic mountaineer and six-year-old Pietro demands to hike with him.

Part 1, “The Mountain of Childhood,” details the many summers after Pietro meets Bruno, a local lad. As they roam the mountains and hike with Giovanni, Bruno draws closer to the family, until his brutish father takes him off to learn building. After Pietro, disturbed by his parents’ growing estrangement, breaks with Giovanni at sixteen, he meets Bruno once more.

In part 3, “A Friend in Winter,” Bruno’s refusal to leave the mountain costs him his farm, lover, and child. On the last of several anxious trips from Nepal to Grana, Pietro finds Bruno alone in snow-bound Barma. An avalanche teaches Pietro the dangers of Alpine winters, but Bruno rejects all his pleas to descend.

Majestic but brutal, resisting man’s efforts to tame them, these mountains embody time and impermanence. Abandoned homesteads dot meadows. Farms untended soon revert to pasture. Nature will reclaim Barma. The Alps and Dolomites are old, the Himalayas young. Glaciers are “the snow of winters past.” And many, including Giovanni, hike to remember their youth and ponder their lives.

At last Pietro understands a Himalayan proverb: like his father, he toured the eight mountains while Bruno dwelt on the summit, that difference having shaped their lives and vision. Forsaking his childhood mountain, since roaming the others “is all that remains for those who . . . on the first and highest mountain have lost a friend,” Pietro has come, like Wordsworth, “to look on nature not as in the hour / Of thoughtless youth; but hearing oftentimes / The still, sad music of humanity.”