The Best We Could Do by Thi Bui & Saigon Calling: London 1963–75 by Marcelino Truong 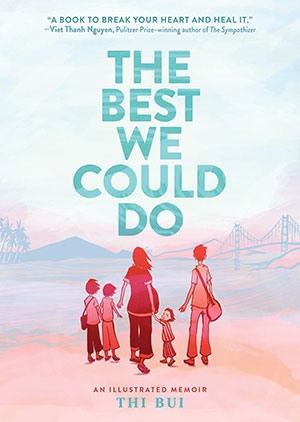 Half a century on, the West’s dominant understanding of events Americans call the Vietnam War still largely focuses through the lens of the US actors—the experiences, factual and fictional, of US soldiers and of protesters against the war. Recent works by two graphic memoirists, Marcelino Truong and Thi Bui, each with family roots in Vietnam, present welcome and important correctives to this imbalance of narrative vision.

Following the 2016 publication of Such a Lovely Little War in English translation from French, the second volume in Truong’s memoir, Saigon Calling, continues the chronicle of his bicultural diplomatic family (French mother and Vietnamese father) from Saigon in the early days of the war to the United States and then to Europe. This second volume picks up in London, where Truong’s family now lives, his father having left the Vietnamese diplomatic service because of challenges that work presented to his wife’s mental health.

The Truong family’s daily struggles as foreigners in the UK play out against a backdrop of powerful social changes. The Beatles are everywhere, fashion is shifting rapidly, a rebellious youth culture is ascendant. Truong’s own family configuration stands at the nexus of a world newly attendant to the fallout of imperialism, crystallized in a war he now experiences at a remove but with a sharp and familial intimacy. The acute sense of the artists’ hand in the artwork reinforces this intimacy with watercolor washes across thick black ink-brushed illustration. London street scenes pop with color, offering stark contrast to the grim gray images of the black-and-white TV-like Vietnam war zone. Word and image together often intensify the connected narratives of family and war. In one double-page spread, Truong’s mother walks in the winter London streets, thinking about what to make for supper, a bright red double-decker bus rushing by, and a ribbon of text streaming above the entire scene, reporting on antiwar protests in Oakland, California. The memoir follows Truong to university, where his amazement over the innocence of leftists grows into the present-day narrator’s clear frustration over westerners’ lack of nuanced understanding of the conflict. Together, Truong’s two volumes work hard to illuminate, if not always clarify, the complexity of this war, its history and politics, and its effects on real people—like the estimated three million refugee “boat people,” of whom many thousands lost their lives.

Thi Bui’s family are “boat people” who survived. Like countless others, Bui’s family became refugees, fleeing the country as the war intensified and enduring a chaotic and frightening journey by foot, boat, and plane, through hostile territories, refugee camps, and a complex US immigration system. Her memoir, The Best We Could Do, triggered by the birth of her own first child, moves backward through the war’s history and its effects on her family as she recounts the births of each of her siblings, from the US, to a refugee camp, to Vietnam, where Bui herself was born.

Where Truong struggles to understand his mother’s mental illness, exacerbated by war and dislocation, Bui is tormented by her father’s similarly shaped demons. Bui’s adult investigation of her father’s childhood leads her to understand, finally, that “Afraid of my father . . . I had no idea that the terror I felt was only the long shadow of his own.” Her mother, with her studied English fluency and hard realism, largely carries the family, enabling their survival in the United States where her husband seems paralyzed by trauma, unable to work. Her sensitive and gender-aware coming to terms with both her parents’ failings and strengths in the face of difficult conditions is quite finely drawn.

Bui’s black-inked graphic narrative, washed only with orange, is packed with narrative detail: family, political history, geography. Where Truong speaks to educate his audience, albeit with restrained judgment, Bui’s narrative is more inward-facing; she seems to be trying to understand the complexity for herself. The more self-effacing result is an equally, if not more powerful illumination of history. Bui’s particularly good use of framing—and unframing—emphasizes the nature and role of borders in this story, as narrative constrictions and possibilities shift with the opening and closing down of frames. The national border outline of Vietnam appears everywhere—on people’s bodies, in the background; as it is for Truong, Vietnam is embedded in Bui’s identity. Binational from birth, Truong remains deeply concerned with the place, Vietnam, without being nationalistic. Bui comes to embrace the idea that movement itself can be a form of “homeland.” She explains, “The ground was always shifting beneath my parents’ feet.”

Borders, like frames in a comic, are drawn things. And both of these writers manage to create a sense of place that is far less rooted in fixed geography than in relationships—a happy antidote to a world of walls.