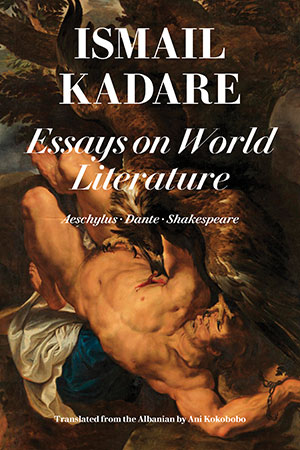 Ismail Kadare’s first and only collection of essays translated into English, this time directly from the Albanian originals written between 1985 and 2006, offers profound and highly personal meditations on canonical figures of world literary history. Together, the essays consider the circulation of “world” literature (always distinctly European, and by men, in Kadare’s account) in Albania and, in doing so, argue for the significance of tragedy to Balkan people’s lives, imaginations, and self-identification. This includes the impulse to elide cultural, linguistic, ethnic, and historical differences in service of a distinct “Balkanness” that attests to the unifying pain of ethno/geocultural conflict over the millennia.

Kadare reflects in three essays on “great” writers in the world literary tradition: Aeschylus, whom he calls the “lost”; Dante, the “inevitable”; and Shakespeare, the “difficult prince.” Kadare’s essays provide histories of these writers’ place in the Albanian intellectual and mythohistorical imaginaries as well as in Kadare’s own thinking about the purpose of writing. Aeschylus enjoys a more or less constant presence, but Dante and Shakespeare are latecomers as a result of repressive Ottoman rule, arriving in Albanian translations only following independence in the twentieth century. Dante makes a particular impression on Kadare, who says that the Florentine poet’s greatest lesson was that “the natural state of the great writer is . . . to travel alive among the dead.” Dante is thus figured as the ultimate poet of the Albanian experience; “Dantesque” describes nothing if not the spiraling centuries of Albanian life under multiple empires and then Hoxha.

Aeschylus, the topic of his earliest and longest essay, represents to Kadare the largely lost origin of world literature and thus of “civilization” itself; though Greek, Aeschylus’s sense of the tragic emerged from a uniquely Balkan understanding of mourning, Kadare argues, and he was therefore, like any Albanian, haunted by pains peculiar to Balkan life. Shakespeare’s Hamlet, in the final essay, represents the “impossible drama” of Albania, of the blood feuds of the traditional Albanian legal code, the Kanun, and of the centuries of ceaseless squabble over land, power, and identity that, like Hamlet’s own blood feud, made life a tragedy.

In his indelibly humanist understanding of art, Kadare conceives of literature—the work of canonically great writers—as art that “cries with the world,” seeking through letters to understand the uniquely and most deeply human: tragedy, violence, pain. He adopts the language “crying with the world” from a Gjirokastër idiom that describes intimate mourning among relatives and nonrelatives alike; tragedy, for Kadare, speaking always through the violent history of the Balkans, is a binding tie among the people of Albania and its neighbors, the purest if the most painful source of literary inspiration.

Literature as a “crying with the world” is not only a lament for the self but also a reminder of those hurt in the production of the self. Kadare attests as much in his reading of Homer, one who made the Greeks’ deceitful destruction of the Trojans, murdered while they slept, the basis of Greece’s greatest epic of unified mythohistoric selfhood.

Through his provocations on Aeschylus, Dante, Shakespeare, and the vicissitudes of Albanian history, Kadare argues that to see Albanian literature as world literature is to see Albania simultaneously as the subject of its own self-inflicted tragedy and as the object of violence committed against it. It is to see Albania as European and therefore part of Europe’s imperialist history; within Europe, as unremittingly Balkan and thus always peripheral to the flows of European power; and among them all, as an ethno/geocultural essence apart—lost like the origins of tragedy, inevitable like the violence of the political, difficult like the ghosts of the past. The “world” of Kadare’s three essays on “world literature” is a reflection of Albania’s “impossible drama” on the global scale of human history, an observation at once parochial and profound, like the greatness of great art.