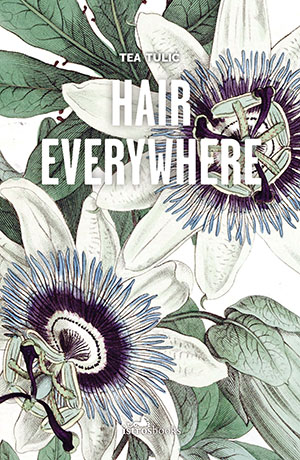 In her slim novel Hair Everywhere, Croatian author Tea Tulić presents a compilation of interconnected, fragmentary prose poems that reflect how one young woman experiences the terminal illness of her middle-aged mother. It is a lyrical study of the ways that the mundane, everyday patterns of our lived lives are colored yet somehow continue even in the face of a looming death.

The unnamed young woman who narrates the novel struggles to sustain herself and her family—father, brother, sisters, and grandmother—from succumbing to despair after the diagnosis of her mother’s inoperable cancer. The days between diagnosis and death are at once plodding and swift: quack remedies are procured, hospital bureaucracies negotiated, and all variety of enticing foods prepared to tempt the patient’s nonexistent appetite. The narrator finds herself swept up in the crisis, and her busy efforts afford too little relief for her mother, her family, and even herself. The staccato of Tulić’s straightforward sentences and her choice of pithy vignettes to convey the story are effective in evoking a frustrated lack of agency over the course of events. And anecdotes about family ghosts, spells, and superstitions enhance this feeling for the reader.

The family’s matriarchal nature is the axis of the story, and throughout we accumulate glimpses of the strained but loving relationships among the narrator and her female relatives, most often those with her mother and her maternal grandmother. There is an innate longing to sustain a female legacy and sorrow that the mother, both the recipient and conveyer of that legacy, will no longer be present to foster.

Despite the theme of illness and dying, Tulić’s prose possesses a sensory vibrancy; her descriptions are full of colors, textures, and smells. At times there is a playful absurdity in the language, and the author slyly deploys double entendres to good effect. Indeed, it is with absurdity, perhaps, that we are best equipped to explore the seeming incongruity between our prosaic, daily routines and a phenomenon as profound as death.