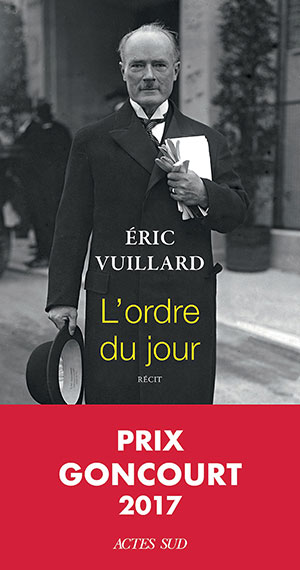 The Prix Goncourt, France’s most prestigious literary prize, is awarded annually in early November. The 2017 winner broke precedent by hardly qualifying as a novel. L’Ordre du jour (“The order of the day” or “The agenda”) is a short historical narrative centered on the Anschluss, the 1938 annexation of Austria by Nazi Germany. The result of painstaking research, it is related to “fiction” in the sense that real historical events are arranged and narrated in ways that are somewhat similar to the suspenseful, dramatic storytelling techniques of traditional historical novels.

By highlighting certain interrelated actions and individuals, Éric Vuillard provides a fresh, multifaceted reexamination of a seemingly well-known moment of twentieth-century history. Along with the Anschluss itself, Vuillard’s book describes the 1933 meeting between twenty-four heads of major German companies, who agreed to provide financing to the Nazi Party. The steel magnate Gustav Krupp, one of the participants in that meeting, became one of the beneficiaries of the Reich’s massive use of slave labor, the ghostly evocation of which constitutes the book’s concluding section. Also described in farcical detail is the lavish reception held by British prime minister Neville Chamberlain for the departing German ambassador Joachim von Ribbentrop—on the day German troops were entering Austria.

In Vuillard’s tightly constructed narrative, the worst tragedies of the century are preceded or accompanied by the ludicrous activities of mediocre individuals. The apparently trivial anecdotes in fact shed light on the enormous destruction of people and civilization. Vuillard has become adept at this type of historical investigation, which generally alternates between a somberly gripping narration and a more sardonic retelling of relatively minor events. In Conquistadors (2009), he depicted the end of the Inca Empire. Congo (2012) was an examination of one of the worst cases of the colonial “scramble for Africa.” 14 juillet (2016) provided an original account of the most famous episode of the 1789 French Revolution.

Vuillard is also a screenwriter and has directed two films. His approach to literary narrative does seem to be influenced by the practice of cinematic montage, of condensing time and space through the use of short, carefully edited segments of information.