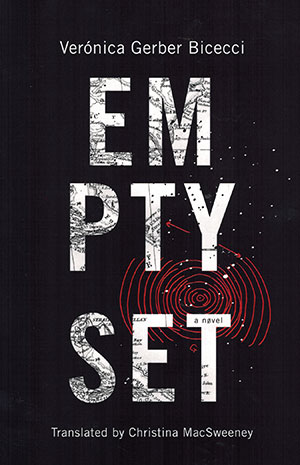 Part family history, part lost love story, and mostly memoirish novel, Verónica Gerber Bicecci’s experiment with fragmented narrative augmented by illustration is not entirely successful but is quite engaging in many ways.

The first-person narrator, Verónica, begins with her love life and loss, employing mathematical-style parenthetical notation at the end of names: Tordo (T), Mom (M). This oddity becomes less so as she begins to use this alphabetic shorthand in the diagrams she employs to illustrate the complex and sometimes not so complex interactions among the characters. As a result, she provides an emphatic reassertion of certain prose points in graphic form.

Loss and disappearance dominate the narrative—of a lover, of a mother, and of the many disappeared of Argentina. That country and Mexico are the geographic backdrops for the novel, but Argentina haunts the protagonist. It is never precisely clear whether she was born there and emigrated to Mexico, but the empty set, the nothingness, at the core of her story finds its roots there. Verónica has clear theories about this specific kind of emptiness. She notes that as opposed to the sudden and complete absence created by death, which eventually heals, “Disappearance . . . makes a tiny, uncertain wound that grows a little larger every day.”

There are also several elusive characters who make appearances throughout the novel. After Tordo (T) leaves her, Verónica is hired to archive the papers of Marisa (Mx), the mother of Alonso (A). She is intrigued and somewhat smitten by him, but he, too, turns out to be hard to pin down. And her task of archiving turns into a tale of detection, trying to find the truth of the mysterious Marisa.

Bicecci’s writing can be captivating and her aperçus striking if a bit simple: “We’re all waiting for what we can’t see to finally appear.” The diagrams, often Venn, and other illustrations serve to underscore her points. But some of the risks she takes, such as writing sections in nonsense syllables or pursuing words down definitional rabbit holes, may leave the reader more frustrated than delighted.