The Invisible Valley by Su Wei 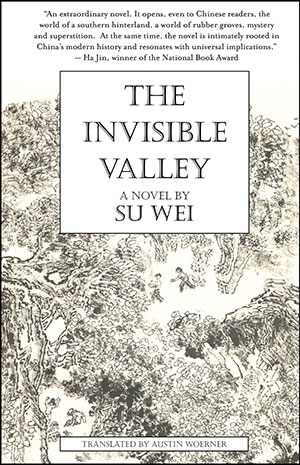 Su Wei currently teaches Chinese language and literature at Yale University, and The Invisible Valley is his first novel available in English. The novel stars Lu Beiping, a “re-ed,” one of the many students sent to the Chinese countryside in the 1960s and ’70s to learn from farmers and be reformed. Lu is sent to the tropical jungle island of Hai-nan, where he is torn between the modern Communist movement of which he is not too fond and traditional ideas he considers backward. He is “ghost-married” (married to someone who has already died) to the daughter of the foreman of his work group and sent to Mudkettle Mountain where he will herd cattle in seclusion. While on the mountain he meets a group of drifters. The woman, Jade, is the center of a polyandrous family structure and takes interest in Lu. He must be careful not to offend the drifter men, especially Kingfisher, the superstitious and strict head of household. Lu quickly becomes integrated into their band, but not without consequences.

Mudkettle Mountain is rife with dangers both natural and supernatural. The locals speak of wispwomen and a mysterious serpent demon that lives on the mountain. Although Lu does not believe the myth, he begins to herd his cattle more cautiously. When a typhoon rips through the area, one of the animals goes into labor and the lead bull goes missing, with some blaming the serpent demon for the disappearance. The paranormal aspects of the mountain are quickly overshadowed by the very real problems facing Lu. The mysterious suicide of his “ghost-wife” begins to haunt him, and he attempts to investigate her death, eventually unraveling an abusive past and her deep despair. He must also be careful to hide his dealings with the drifters from his working group and make a good impression if he has any hope of returning to the city. The story reaches its climax when he is eventually confronted about his relationship with the family.

The Invisible Valley takes the reader along a journey full of mystery, magic, and political intrigue. The characters are full of nuance and contradiction, each keeping their own secrets. As each secret is revealed, the reader comes closer to understanding the larger picture. Combined with the balance between the natural and supernatural, this makes the novel interesting for any reader.