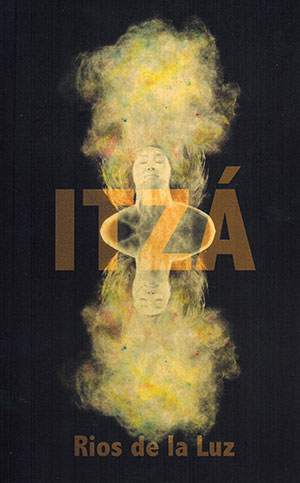 Chichén Itzá is a pyramid in Yucatan, Mexico, named partly for the people of Itzá who lived there. Like the ancient Mayans, to speak of Itzá, Rios de la Luz’s novella, is to look into the lineage of a certain people, in this case, a familia of water witches. The novella follows four generations of women as told through the experience of Marisol. Simultaneously entrancing and harrowing, Itzá captivates readers with a rebellious, testimonial form living in the hybrid boundaries of fiction, science fiction, and fantasy. By using first-, second-, and third-person voice as well as writing outside of linear time, the novella acts like a crystal releasing its vibrations, which come through in the voice of a child, a sister, or a disembodied grandmother.

In writing these characters, de la Luz does not simply imagine the lives of a magical family but also writes in the tenor of the spells they might cast. It only seems apropos to begin the novella with an introduction to the woman who started it all, the witchy Abuelita Araceli. When Marisol’s family travels to bury her, she whispers, “Did Abuelita pass her bruja intuition down to me?” This pining for bruja intuition and a connection to her abuelas is important for Marisol, who processes traumatic events through making her own brand of earthly rituals or visiting her family’s graves.

Marisol’s incantations are embodied. Her spells always act from the outside-in as a way to heal herself. Though she is often silenced, she remembers what her Abuelita said: “You must survive at all costs.” Survival is a repeated refrain in the novella, along with “resilience.” It only makes sense that the family lives in a place called Nopales (cacti), as the novella rejects the cultural cliché of brown women’s bodies as a site of pity and pain. Instead, Itzá shows the ability for these women to flourish. Though the women are fictional, they have real potential to reach out to readers and say, “You are not alone; you deserve to exist.”

In Mayan, Itzá means “water magicians.” The influence of this title takes on more than a literal meaning in the novella. Just as the Chichén Itzá pyramids remind us of the past mystics who walked on this earth, in Itzá, the living ancestors embody the almost magical power passed down to them: resilience.