Mother of All Pigs by Malu Halasa 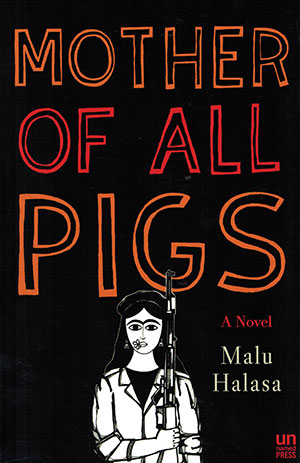 In the nexus of Europe, Asia, and Africa known as the Levant, Jordan is almost landlocked by Saudi Arabia, Iraq, Syria, Israel, and Palestine. Long a refugee oasis, the country has recently faced large arrivals. Sunni Muslims comprise the vast majority of this monarchy, with Christians a tiny minority. Halasa portrays the Sabas family, Christians in a small conservative town bordering Syria.

Characters discuss the Arab Awakening, the deceptive nature of first impressions in a dictatorship, CSI, munitions profiteering, drones, Russia and the US, Daesh and the caliphate, Iraq as “a quagmire of angry religion,” and American dualism: “You feel better if one side’s good and the other is bad. Life is more complicated than that.” Paragraphs lengthen with facts. One misses musings from the Mother of All Pigs. Some details are not for the faint of heart.

Is Umm al-Khanaazeer a cuddly literary pig in the mold of Wilbur, Piglet, Mercy Watson, Olivia, Gub Gub, or Babe? No. The Mother of All Pigs nods to Animal Farm and concludes à la Lord of the Flies. Malu Halasa slaughters “a thousand years of tradition” in a world run amok as a feminist peace offering.