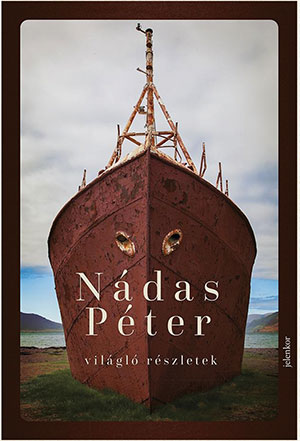 Péter Nádas is a writer with deep roots in the past. His first, short novel, Egy családregény vége (End of a family novel), published in 1977, was a poetic evocation of his childhood and his closest—Hungarian Jewish—family. His present, monumental novel is a piece of docufiction focusing on his extended family from great-grandfather down, with episodes of Nádas’s own early years in Communist Hungary alternating with snaphots of friends and family members. This Neumayer-Tauber-Nádas story could be dubbed as ”A Family Saga from the Beginning,” starting in the nineteenth century and ending with the memorable events of 1956, told from the narrator’s point of view and objectively evaluated.

The title of the new book is hard to translate, for Világló részletek could be rendered in several ways: “Shining Episodes” is a possibility, but “Illuminating Parts” is another. Its subtitle indicates these are “reminiscences from the life of a narrator,” no doubt arbitrarily selected yet carefully structured. Since Nádas is an excellent photographer, one may look at his prose as a composite photo album with long commentaries to the imaginary photographs. What makes these connecting commentaries exciting is the author’s unusual sensitivity to the meaning of words—that is, his analysis of certain expressions and words from the point of view of both the speaker and the listener. Ambling through his text, Nádas sometimes stops at a word (e.g., galacsin, a pellet of bread) and tells a story about feeding seagulls, adding that this particular word became embedded in his mind due to an episode associated with his father. At other times, he muses over his grandmother’s quaint use of Hungarian or else points out how a word was used within the Communist movement to brand deviations—for example, “sectarian” could be an adjective-noun applied to anything that differed from the actual party line.

The best parts of Világló részletek analyze the mind of an ascetic Communist—how to solve the dilemma of repeated purges that eliminate good, reliable comrades and remain faithful to the movement. This is one of the main problems Nádas’s mother has to cope with, especially once the previous minister of the interior, László Rajk, is executed for “Titoism and imperialist plotting” in 1949. Another “shining episode” is the author’s belated visit to Le Vernet, a notorious French internment camp near the Pyrenees where his uncle, Pál Aranyossi (as well as Arthur Koestler), was interned after the Spanish Civil War.

While reconstructing family history, including generous descriptions of the apartments and houses where his parents lived in the 1950s, Nádas also tells of his love of all living things: trees, plants, and a little dog killed in mysterious circumstances. While the family is torn apart by drama (the author’s mother dies of cancer, his father commits suicide sometime later), Világló részletek is not without merry moments—for example, children’s appropriation and loud proclamation of taboo words of a sexual nature in a tenement block on the Pozsonyi út. While postmodern in its construction (the narrative keeps hopping forward and backward between years and periods), Nádas’s new book still has much in common with the modern novels of Thomas Mann and Robert Musil.

As a large number of relatives are mentioned in the narrative, a family tree would have been helpful to the patient reader. Nonetheless, the two volumes of Világló részletek are arguably the greatest achievement of the author of The End of a Family Story and Parallel Stories, a writer of European stature.