They Know Not What They Do by Jussi Valtonen 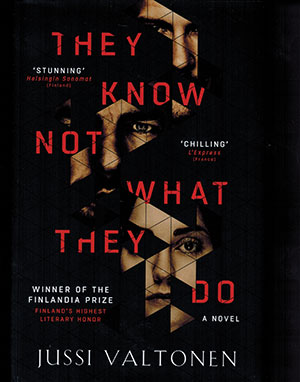 “They know not what they do” is a plea for forgiveness, but in the context of this remarkable novel, the phrase takes on an unforgiving note. True, Jussi Valtonen writes about individuals and how they experience life with such exact attention to detail that, at first, his novel reads like The Way We Live Now reconfigured for the mid-twenty-first century. He shares Trollope’s sharp wit, insight into why people act as they do, and fascination for the way social settings shape their actions. On the other hand, Valtonen’s villains are not so much individuals as closed groups—political, commercial, cultish—that thrive on organizing acquisitiveness and blinkered aggression. The darkness of the satire is very much Valtonen’s own, and it grows pitch-black toward the end, when it becomes clear that we are as ready as ever to kill those who might save us.

At first, though, the focus is on individuals: Alina, a Finnish science graduate meets Joe, a Jewish American neuroscientist. They marry and he moves to Helsinki. Joe misses the ease and dynamism of his country and his close Jewish family but works hard to make it in Finland. Alina is left alone with their son, Samuel, for too long, and eventually their separate identity crises end in divorce.

Time meanders and loops back on itself, but when we catch up with Joe, the year is probably 2033 because the seventeen-year cicadas emerge as an eerie sideshow in the great Clock Maker’s plan. Joe is now professor Joseph Chayefski, married and father of Rebecca and Daniella. He is doing outstanding work on visual processing in the cat brain but has become a target for aggressive animal-rights campaigners, a crowd that won’t even listen to what he has to say. As forlornly, he tries and fails to organize a boycott of a media conglomerate that is buying up journals in the life sciences with the only too plausible aim of turning their articles into science-on-demand press releases for client companies. Joe’s most urgent cause is to fight a mystery corporation, which, under the absurd banner “The Children Are the Future,” is infiltrating schools while peddling a crazily consumerist teen culture. Rebecca and her peers adore its ultracool products and pep pills for top achievers. Coolest of all is the improbable but scary iAm, a mind-controlled, Cloud-interactive device. Via iAm, your brain’s summed electrical activity—call it your consciousness—can effortlessly direct data streams of your choice (or is it?) into your mind; its appeal to curiosity, gullibility, and intellectual laziness is irresistible despite its implicit dangers. Joe finds out just how dangerous in a long passage of knowingly imagined mental subjection.

Meanwhile, Alina and Samuel—to Joe, vague figures from the past—have carried on with their lives. Samuel, gifted with charm and intelligence, has always been devoted to his distant father. None of this helps him cope with life as a teenager. In an absorbing coming-of-age novel within the novel, Samuel tries to find out who he is and wants to be. His agonies of indecision and self-doubt are raw and real and complicated by his conviction that he should do something to save profligate humanity from itself. His epiphany is a chance realization of what commercial science does to animals: he joins an animal rights group and ends up in the US, where he leads a successful anticorporate campaign. By then he has grown up into someone exceptional, a prophet in the making in his father’s country.

The focus shifts between Samuel, full of hope and energy, and his father, who is One of Us, a liberal Everyman lost in a fast-changing world—what price now individual integrity or knowledge for its own sake? The narrative gradually becomes a vehicle for social critique, as troubling as the “attack on the demoralisation and dehumanisation of American society” in Network, the film by Joe’s namesake, Paddy Chayefsky. As Joe’s harassment escalates into terror, the police move in, offering their own brutal means to “protect” the family. When a parcel bomb nearly kills Daniella, her parents abandon all belief in nonviolence and buy guns. Is Samuel part of the lethal threat? Powerful emotions, random coincidences, and frightening stupidity fuse to create breathless suspense as the confrontation between the armed, terrified father and his allegedly terrorist son draws closer. The end comes with a note of mind-chilling irony that seems to herald Götterdämmerung.

Valtonen’s grip on plot and character is so masterful that his storytelling easily contains his restless speculation about influences on how we live now and where we might end up as our old value systems begin to crumble. 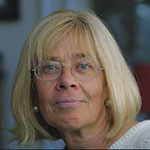 Anna Paterson, an experimental and clinical neuroscientist, now has a new profession as a writer, critic, and award-winning translator from the Germanic languages into English. She lives in northeast Scotland.