Thinking Continental: Writing the Planet One Place at a Time 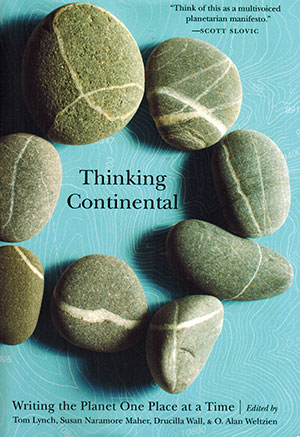 None can deny that we live in an age of incredible change. Thinking Continental: Writing the Planet One Place as a Time is an anthology of poetry, personal narratives, and critical essays that responds holistically to the unprecedented pressures on the environment today.

Thinking Continental contains a variety of genres to appeal to many readers, but it would be particularly apt as an academic text for a sustainability or environmental literature course or as a supplemental text in an ecology, sociology, or economics course. The essays range from sophisticated cultural and literary criticism such as Fabiana Dimpflmeier’s “Where Narratives Met” or Drucilla Wall’s “Life on the Western Edge of It All” to the genre-exploding collaboration “Cacophonus Silence (The Sound of Falling Wildly)” by Jess Allen and Bronwyn Preece (self-described as a “transnational experiment in ecological performance poiesis”). Between these antipodes, works such as Elizabeth Dodd’s “A World of Islands” or Brendan Galvin’s “Plovers, Great Blues, Horned Owl” provide vivid and very relatable narratives of place appropriate for a general audience.

Interwoven between the essays and narratives in Thinking Continental, the poetry would be a fine collection in its own right with work from Alberto Ríos, Tess Gallagher, Linda Hogan, and many others. Twyla M. Hansen’s “Communion” captures the soul of the collection with a lament for a liminal place, the windbreaks between fields where the poem’s speaker wandered as a child. Alive now only in memory (and vivid verse), these places have been replaced by “a factory of corn / and soybean” built to the scale of machines, and the earth is the body of Christ torn in a heedless and irreverent Eucharist. Ann Fisher-Wirth’s “Mississippi Delta Lay Down” merges the speaker’s memory of her earlier vow to never live in the turbulent South with a poignant description of that very place, now home. Walter Bargen’s poem “A Line from Dogen” summarizes the project. “These clocks are useless,” he writes, “They only measure themselves.” We are urged to “follow the geese / that follow the stars,” and to the repeated question “Where do we turn?” Bargen offers, as the last line in the book, one answer: “Into the turning.”

In their introduction, the editors explain how the wide variety of texts fits with their critical purpose. The editors contrast globalization, “transnational political and corporate systems,” with plantarianism, a concern for the “biospheric, multicultural, and eco-centered interrelationships that often form the core of resistance to globalization.” In his contribution to the book, “Braided Channels of Watershed Consciousness,” editor Tom Lynch deepens this perspective. Lynch rejects the “false and unproductive dichotomy between lococentrisism versus a global perspective.” He opts instead for a perspective borrowed from the poet Gary Snyder, who writes, “The watershed is the first and last nation whose boundaries, though subtly shifting, are unarguable.” When we see the environment as distinct but interconnected systems, it becomes possible to be at once place-based and planetary.

Great change is upon us, and Thinking Continental is an important testimony to the emerging Anthropocene.