Literary Translation and the Making of Originals by Karen Emmerich 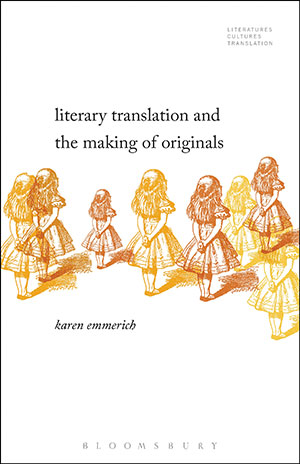 Of the thousands of adages that elucidate translation, one of the most oft-quoted is Jorge Luis Borges’s “The original is unfaithful to the translation.” In these seven words, Borges at once invokes and turns on its head the notion of fidelity, a highly contested concept within the field of literary translation, and one that Karen Emmerich interrogates in Literary Translation and the Making of Originals, especially as it relates to the notion of original text(s).

Emmerich adroitly slays each of these sacred cows in a single blow, arguing, “The commonplace insistence of an ideal of translational ‘fidelity’ means that promiscuity is for originals alone; the last thing we want is for a translation to go messing around with an unstable text, much less with several at once.”

This is but one of many salvos Emmerich fires in her book, which, according to the author, “has the perhaps immodest goal of challenging the time-honored tradition—long upheld by readers, reviewers, publishers, literary scholars, even many translators and scholars of translation—of referring to the objects of literary translation as if each were a known quantity, a singular entity whose lexical context is stable or fixed: the ‘original,’ ‘the Arabic original,’ ‘the original French text,’ ‘the source text,’ ‘Kafka’s German,’ and so on.”

To elucidate this claim, Emmerich reminds us that Kafka’s texts “have been multiply mediated by numerous critics over the years,” that The Thousand and One Nights “has a history of cross-lingual composition and circulation as complex as the stories it tells, including the translation into Arabic, and then back out again, of tales first published in eighteenth-century French,” and that Virginia Woolf’s novels were “typeset and printed in both the U.K. and the U.S. from two separate sets of proofs, exhibit[ing] slight but (some would say) significant differences across these editions,” which, she concludes, “complicat[es] the task of the translator who seeks to settle on a ‘source text’ for one of Woolf’s works.”

The oblique reference to Walter Benjamin’s seminal essay, “The Task of the Translator,” is not incidental. On the contrary, she returns to the essay throughout the text, before ultimately asserting that “Benjamin flatly declares that the translator’s task cannot be to ‘strive for similarity to the original’ or to convey ‘the form and the sense of the original as accurately as possible,’ since form and sense are eternally in flux, and therefore impossible to replicate or even imitate in another language.”