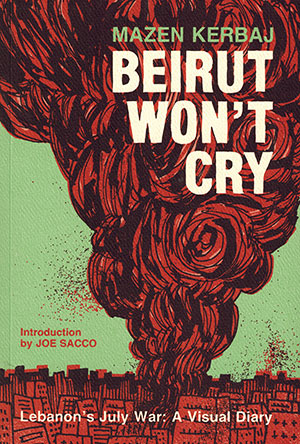 Standing on his balcony in the neighborhood of Sin el-Fil in east Beirut, Mazen Kerbaj plays his trumpet to the accompaniment of the Israeli air force, whose planes are pelting the city with bombs. Surreal scenes like this one convey the poetic and at times bizarre character of Kerbaj’s visual diary of Israel’s thirty-four-day war on Lebanon in July and August 2006.

Kerbaj’s cartoons, narrated in English, Arabic, and French, convey the complex mixture of emotions he experienced during the war. In stark black-and-white drawings, he carries his audience on his journey from despair to anger to apathy and back again—along with brief but happy respites during his trips out of Beirut to visit his son and ex-wife in the mountains beyond the city. When not focusing on his personal experience, Kerbaj is unrelentingly honest and vulgar, heaping criticism equally on Israel, the United Nations, and the US administration under George Bush for their respective action (or inaction) during the war.

But the print publication of the book is actually the second time these images have been shared with the world. The book emerges out of his blog, where he chronicled his experience as events took place in 2006. The printed account is punctuated with the written blog posts offering commentary and describing the difficulty of uploading the images, which he calls on his readers to share with the world. These refrains to the global community are confusingly coupled with his constant reply to his commenters that the blog and its images are “not political.”

Instead of geopolitics, Kerjab’s visual diary prefers to emphasize the humanitarian tragedy of the war and the over 1,500 deaths that resulted from it. To do so, he uses images that are at once comical and haunting. The transition from black and white to color following the end of the war in August brings with it a sense of postwar trauma and an ominous look toward Lebanon’s future rather than a sense of relief.

A consistent theme that unites the images is communicated in the book’s title: Beirut Won’t Cry. After decades of civil war, the city’s people have shown themselves to be utterly resilient. Kerbaj’s book demonstrates this well, as he continues to play music, go to his favorite bar, and enjoy the company of friends—all while Israeli bombs drop around him.