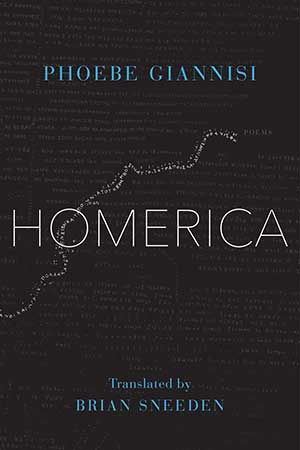 Perhaps more than any other oral epic, The Odyssey is a story about retelling one’s own story. It, therefore, demands to be recast and retold in new literary forms. Just as Joyce’s reinvention of the old myth was a reinvention of English prose, Phoebe Giannisi’s poetry collection Homerica is a reinvention of Greek lyric verse and its language. In this attractive bilingual edition, Brian Sneeden’s English translation maintains the inventiveness of the original while hewing miraculously close to the Greek.

Homerica recasts scenes from The Odyssey as scenes in a modern, everyday Greek life: banquets become TV dinners, and the Zeus who preys on mortal women becomes an inattentive boyfriend who “scans the beach / for fresh masturbation material.” Giannisi is funny, empathetic, inventive, but, above all, she is intimate. Hers is an intimacy between language and the mind, an intimacy expressed in subtly shifting syntax that borrows heavily from Homer but feels vital and new. She uses this syntax to mimic the natural cadence of thought: “The medicine eaten / the medicine a flower / the medicine the medicine / forgetting / each moment a new beginning.” On first sight, we read forgetting as a substantive: “the medicine is [the act of] forgetting.” But as we continue into the next line, this meaning is forgotten, and forgetting becomes a verb: “the medicine / [forgets] / each moment.” But as soon as we adjust to accommodate this new meaning, Gianissi subverts it as well. This is how Gianissi fuses music and memory, and that the translation manages to re-create this in English is a remarkable feat.

Brian Sneeden brings Homerica’s psycholinguistic subtleties into English with grace and apparent effortlessness. His ability to match Giannisi’s oracular incantations and agile syntax is magical. Sneeden proves that it is essential for a translator of poetry to be a poet in his own right. I believe this is what Anne Carson responded to when, in the Paris Review, she chose Homerica as one of her two favorite books of 2017, calling it “unusually excellent in translation.”

Giannisi is part of a new era in Greek poetry that has already begun to attract international audiences and dedicated English translations, as evidenced in Penguin’s new anthology, Austerity Measures. This renewed international interest is reminiscent of the mid-twentieth-century boom in Greek poetry that included the Nobel Prize winners George Seferis and Odysseus Elytis. Giannisi has inherited Seferis’s dense allusions and interest in incorporating the lyric “I” into myth. Giannisi’s “I,” however, is far more pluralistic than Seferis’s. She adopts the voices of insects and animals alongside those of Odysseus, Penelope, and herself. This fluidity of identity builds on the lineage of late-twentieth-century Greek women poets, including Rhea Galanaki and Jenny Mastoraki. But despite these historical resonances, Giannisi is unquestionably herself within a vanguard of Greek poets for whom self-awareness and honesty have become second nature.