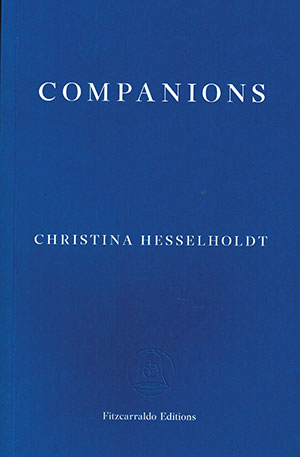 The five characters in Companions struggle with the trials and tribulations of middle age in the twenty-first century. Loneliness and isolation caused by their failed love lives are a particular source of consternation, but their friendships are something to which they cling for security and reassurance amidst their various crises.

Danish novelist Christina Hesselholdt’s narrative explores different types of love—romantic, filial, platonic—and the existential angst that these emotions cause. Time and again the theme of death is considered in the author’s fragmented, intertextual, and postmodern writing. Forty-year-old Camilla is the central figure in the narrative—or her thoughts, at least, get the most attention. She is married to Charles, who suffers from chronic, debilitating back pain, and his illness has put a strain on their relationship. Camilla’s mother is also troubled by various afflictions, both mental and physical, which are a constant source of stress for Camilla. In addition, her dear, depressed friend Edward lives alone with his dog in the house in which his parents committed suicide by hanging themselves.

Camilla is surrounded by weakness, illness, and sadness. Her thoughts are often about mortality—her own and that of those around her. Early in the novel Camilla takes a trip to Belgrade to give a lecture, and her solitude weighs on her heavily. Her thoughts apply to her trip as well as her current state of mind at this point in her life: “Why does the journey reinforce this existential loneliness—never am I closer to death and the abyss than when I am alone on a journey.”

Camilla describes Alma, her lifelong, closest friend as blonde, “my GPS, my light in the darkness.” It is Alma who shows up in Belgrade to help her navigate the city on her first trip there, and it is Alma who is a comforting presence throughout her childhood and adolescence while she is dealing with her mother’s various issues. Edward, Kristian, and Alwilda are also close companions who provide her with support and distraction, and we get their points of view from time to time in the text as well; they themselves are dealing with the ups and downs of various relationships. But Alma provides Camilla with the most constant source of solace and companionship. There are, fittingly, many descriptions of their traveling adventures—from England to Belgrade to Greece.

Companions is laden with references to other authors and pieces of literature; Woolf, Plath, Bernhard, Nabokov, Durrell, and even a quote from Epicurus can be found within the pages of Hesselholdt’s narrative. One wonders if the character of Camilla is in any way autobiographical, as it is evident that the author inserts her own literary preferences into the text. Hesselholdt is particularly sure to tempt any reader to pick up Woolf’s The Waves and Durrell’s The Alexandria Quartet. The author, in discussing Durrell’s novels through Camilla’s thoughts, subtly shows us how we ought to approach and read Companions: “The existence of the absolute unique frame of reference is rejected; all depending on where the events in the books are seen from, they appear different.” Companions is a multilayered and nuanced book worthy of, and in fact, demanding of more than one reading.