The Travels of Ibn Fudayl by George R. Sole 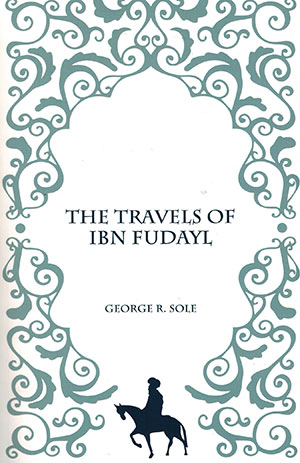 According to the potted bio that fills the first page of this slim volume (eighty-five pages of text, many heavy with footnotes, preceded by an introduction and an annotated glossary, and followed by five pages of bibliography), “Mr. R. Sole” (say it quickly and think of a British English, rather than an American, vulgarism) was discharged from the British army after “he released a greased piglet into a ballroom of diplomats” and now produces “numerous obscure translations of Arabic travelers and historians.”

So we know with what we are dealing, even if we have not yet got round to the back cover, which explicitly blows the gaff: “a satirical tale written in the style of an academic who has translated a medieval manuscript.” A filing clerk allegedly found the Travels by chance in the Asad library in Damascus; this brief account of provenance of the manuscript is followed by a potted history of Andalusia, for the work is said to provide “a remarkable picture” of Muslim-controlled Iberia and “will interest the curious reader as well as the specialist.” The glossary is also a cod: the word himar is “proto-Semitic and pro-biotic in nature” and has its origin ”in the diuretic language groups”; the bibliography, among others, lists an article entitled “The Roots of al-Gore’s Oriental Environmentalism.”

The Travels themselves constitute the meat between these two rather stodgy slices of bread: we read of struggles between adherents of short and long beards vaguely reminiscent of Swift’s high-heels and Big-Endians and their respective opponents (but rather more labored), Ibn Fudayl’s relationship with the learned al-Homsi, and the latter’s eventual fate brought about by means of “the corner of a voluminous book.”

One is aware of the mood and style in which one is expected to review the Travels, namely a corresponding mock-serious facetiousness. But this reviewer had wearied of such an attitude well before he got into Ibn Fudayl’s adventures, with their schoolboy-humor references to a translator called du-Lavatoire, a publisher named Viagra, a scholar denominated R. Scrutom, and a philosopher who “believes that all the truth in the world can be found in the rectum of a dog.” What might have been an amusing squib of a dozen pages had become tedious.