Pearls on a Branch: Tales from the Arab World Told by Women by Najla Jraissaty Khoury 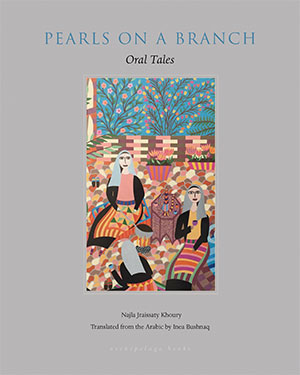 The folkloric stories in Pearls on a Branch feature protagonists, often young women, who work to shape their future through generosity and cleverness. The tales begin with refrains like “There was or there was not,” establishing the ambiguity of their realities, which mingle logic with magic, human with animal. Gathered by Najla Jraissaty Khoury from female Arab storytellers, the stories use repetition and rhyme to construct the vital atmosphere of fairy tales. Several of the stories have popular analogues, such as “Thuraya with the Long, Long Hair” and the Brothers Grimms’ “Rapunzel.” In “Abu Ali the Fox,” a hungry fox vows not to eat prey anymore but ultimately can’t resist his nature, a moral lesson also taught by the fable “The Scorpion and the Frog.”

There are few true villains in this collection. The characters struggle with essentially human flaws, including destructive greed and jealousy, especially jealousy between women. In “Lady Tanaqeesh and the Eggs of the Tawawees,” Lady Tanaqueesh’s jealous sisters trick her into eating eggs that induce pregnancy. In the end, Lady Tanaqueesh chooses a lesser punishment for her sisters’ crime, though she wanted to build a ladder of their bones. The orality of the story translates into print as Lady Tanaqueesh chants, “Going down I’d tread hard on every rung and cry: / Creak! Creak! / Have I harmed you? No not I!”

Dark emotions in the folktales are balanced with tenderness as lovers reconcile and wives pray for infants to hold. A barren woman in “The Olive Pit” is blessed with an olive pit for a daughter, which she nourishes until it sprouts. Female protagonists are agents of peace but also indelibly clever, demonstrating the humor, alternately ribald and subtle, at work in the lives of the tellers. In “The Day It Rained Dumplings,” in order to win an argument, a wife tricks her husband into believing it rained dumplings by scattering them in the yard.

Even the stories without a female protagonist are concerned with how women exercise power in the world and shape their own narratives. As one story puts it, “We will speak: we have stories to tell.”