To Hold Up the Sky by Cixin Liu 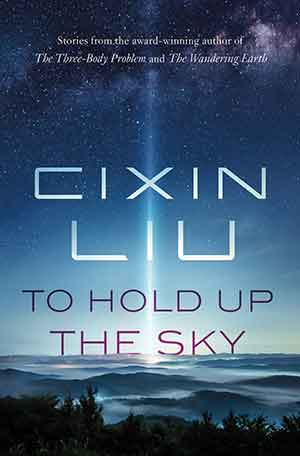 CIXIN LIU likes to think big. Macromolecules, vast time spans, galaxies, and universes: these are just some of the materials Liu plays with (often virtuosically, I might add) in the Three-Body Trilogy, Ball Lightning, Supernova Era, and his many short stories, especially those eleven collected in To Hold Up the Sky (some of which have never before been translated into English). Like historians who study eras and civilizational arcs, Liu is interested in how large swathes of time can help humans think about the future of our species and planet. How will we live in ten thousand years? What will the earth look like in a hundred thousand years? What would happen if time ran backward?

Many of his stories, including a few in To Hold Up the Sky, feature cataclysmic events that set off what characters call the “[X] Era”: in “Sea of Dreams,” the alien who removes all the water from Earth’s oceans sets off the “Ring of Ice Era,” while in “Mirror,” the discovery of a computer program that accurately predicts the future initiates the “Mirror Era.” “Eras” are a key feature of The Supernova Era and the books in the Three-Body Trilogy as well, as humanity must wait hundreds of years between, say, finding out that an alien species is headed for Earth and then actually meeting that species. Time is as much a character in Liu’s work as any human, and indeed Liu often is more interested in exploring time’s curious properties than describing human relationships, psychology, and interactions. “Time Migration” imagines what would happen if a group of people moved so far forward in time that they eventually discovered an Earth as pristine and wild as it was millions of years in the past, while “Contraction” (one of the most successful stories in the collection) posits that time will start moving backward at the exact moment when the universe switches from expanding to contracting.

This collection also includes three intriguing stories about powerful aliens exploiting the Earth to create art. The most fully developed of these, “Sea of Dreams,” introduces us to an amoral alien whose sole interest is in using any kind of matter in the universe to create spectacular objects. When it visits Earth and learns about “low temperature art,” the alien becomes inspired and turns all the oceans into ice, after which it hauls all the ice blocks into orbit to form a kind of jeweled necklace around the planet. Liu carefully contrasts this cosmic creative act with the suffering and destruction that the lack of water causes on Earth. Eventually, humanity summons its last resources to force the ice blocks back down to the surface to begin the process of planetary regeneration. The mirror-alien in “Ode to Joy,” unlike the ice-cube alien, leaves Earth unscathed but uses it as an instrument in a cosmic concert; unfortunately, Liu has the world leaders in the story all speaking authoritatively about astronomy and physics, which renders farcical a piece that would have otherwise been compelling. Finally, a powerful alien race in “Cloud of Poems” destroys much of the Milky Way (though not Earth) in order to power a quantum computer that will generate all the poetry past and present produced by humans.

The two most successful stories in this collection serve as perfect bookends. “The Village Teacher” switches back and forth between a small school in a poor mountain village in China and an intergalactic war between carbon- and silicon-based life-forms. Thanks to the school’s devoted but dying teacher, the schoolchildren are able to recite Newton’s Laws of Motion when they’re tested by an alien species deciding if humanity should be wiped out or not. In “The Thinker,” an astronomer and a brain surgeon realize, after decades of parallel research, that the twinkling of certain kinds of stars mirrors that of neurons firing in the human brain’s right hemisphere. Their conclusion that the universe might itself be conscious is just one example of Cixin Liu’s unique approach to science fiction. Despite the unevenness of the collection, To Hold Up the Sky is yet another exciting contribution to the genre.