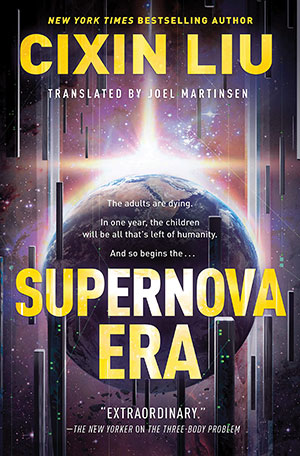 Supernova Era is the fifth novel by Chinese sci-fi author Cixin Liu to come out in English translation since 2014, and this doesn’t even include the collection of his short fiction (The Wandering Earth) and his numerous stand-alone stories in US/UK magazines. While this might seem like a lot of Liu in a short amount of time, anglophone readers should be immensely grateful to translators Ken Liu and Joel Martinsen for giving us the opportunity to
read so much imaginative and ambitious science fiction.

Known for his detailed scientific explanations of phenomena both on the micro and macro level, Liu offers us a complex and fascinating thought experiment in Supernova Era. Written just after the Tiananmen Square massacre in 1989 but only published in China in 2004, this is a novel about how quickly human civilization can come to the verge of collapse in the face of an undetected supernova. Liu devotes seven pages near the beginning of the novel just to a description of exactly how this one particular star was born, how it matured, and then how it collapsed in on itself, sending a blast of intense radiation straight into our solar system, which bathed the Earth for a week. Very quickly, doctors and scientists realize that anyone over the age of thirteen will die within a year due to the radiation’s irreversible physical effects. The adults’ desperate race against time to train their children in their own jobs so that those children can keep the world running leads to a period of “Inertia,” in which the new Children’s World continues functioning seemingly as before. It doesn’t take long, though, for critical systems to shut down and mass panic to break out in the streets. As in Liu’s other novels, it’s up to just a few characters (children, this time) to figure out the right path forward without any precedent to fall back on.

Just as in the Three-Body Trilogy, where only a few characters are forced to make decisions on behalf of all of humanity in relation to an alien civilization, in Supernova Era, China’s three young leaders are faced with problems that have no antecedent: for instance, what should they do when children quit working in droves and instead play in the streets all day and eat without thinking of rationing? How should they react when millions of their young citizens make outrageous demands, like a Candyland that covers hundreds of square miles? And how to deal with the resulting depression and despair when the children realize that they have no goals or apparent purpose?

Liu sets the majority of the novel in China but jumps over to the US for a time, enabling us to compare and contrast the new leadership in each nation and how they deal with similar issues (mass violence, destruction, purposelessness). When two of the most brilliant leaders (one in China and one in the US) separately realize that the new basis for human civilization is play, rather than economics, this breakthrough shifts the trajectory of human history. First, the world’s nations come together in the warming Antarctica to engage in war games, which escalate to full-out nuclear war; the resulting loss of life and stalemate lead them to try another project, namely, transferring all Chinese citizens to the US and vice versa.

While it’s difficult to believe, at times, that children would be capable of making such sophisticated decisions and undertaking immense projects involving ships, tanks, and bombs, Liu continually focuses our attention on larger ideas about the shape and future of human civilization. Liu’s novels are less interested in character development than in systems, crowd theory, and the march of centuries. Entertaining and thought-provoking, Supernova Era will draw you into its strange world before you can even say, “Kids are in charge?!”