God Is Round: Tackling the Giants, Villains, Triumphs, and Scandals of the World’s Favorite Game by Juan Villoro 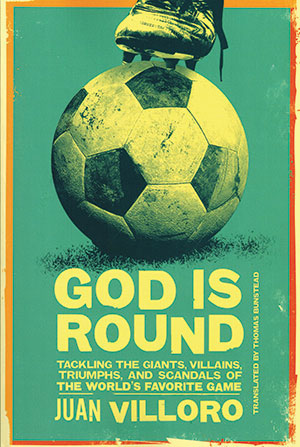 Juan Villoro knows that soccer fans often enjoy rewatching and recounting a spectacular goal more than seeing it for the first time. Reading God Is Round will make fans of soccer and good writing alike wonder how they appreciated either before they read Villoro’s insightful, critical, and ultimately hopeful take on the world’s game (see “World Cup/World Lit,” WLT, May 2011).

God Is Round reproduces the uniquely exciting tension between surprise and order that keeps fans coming back to their favorite sport. Villoro’s return to the Dutch national team of the 1970s, aka “The Clockwork Orange,” combines a reference to Anthony Burgess’s unhappiness regarding the use of his novel’s title with an explanation of Holland’s painful losses in World Cup finals in 1974 and 1978. Germany and Argentina, the respective champions, had suffered more and thus prevailed. History shapes the ninety-minute period during which it seems anything can happen, and its influence takes a variety of forms, including a cursed stadium, the transmigration of childhood play into adult work, and war.

A particularly surprising return to the past tells of the Kiev bakers who prevailed over Nazi occupation forces in a 1943 match, even though the Ukrainians knew victory meant death. This instance of inspiring persistence and the sense of justice that pervades Villoro’s juxtaposition of Miroslav Klose’s insistence on fair play to FIFA’s endemic corruption are central examples of topics that provide his book with structural balance and communicate the guiding idea that optimism is as necessary as it is unreliable, or even unwise. Hope’s fragility is underscored by observations about soccer’s low points, which Villoro makes with characteristic irony, as in his respectful and nuanced discussion of how using his head was Zinedine Zidane’s primary strength and fatal flaw. Balancing surprise with order also describes the way Villoro writes. He keeps his readers wondering what’s next while leading them to perceptive and important conclusions: imagination owes a great deal to physical exertion; and the best players are not necessarily the most skilled but instead those who improve their teammates’ performance.

God Is Round is not only an indispensable companion to international soccer but also a fine introduction of US readers to an award-winning Mexican author whose talent and skill demand that more of his work—novels, short stories, essays, and chronicles—be translated into English. (Editorial note: To read Ryan Long’s interview with Villoro, check out the January 2011 issue of WLT.)