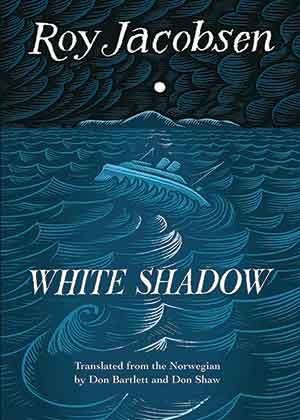 WITH EVERY SENTENCE in his new novel, Roy Jacobsen shows how his characters carve their morality out of the dried driftwood found on the small islands of war-ravaged Norway. White Shadow is yet another masterpiece by Jacobsen, who continues in this short novel to track the vicissitudes of the life of his young heroine Ingrid Barrøy, first introduced in 2020 in Unseen. Jacobsen has rigorously reduced the family cast of the previous novel to narrow in solely on Ingrid, now thirty-five years old, who is trying to make a living (rather than living her own life) during the last years of German occupation.

Just a single drop of sentimentality could have drowned Jacobsen’s entire enterprise as it rests on a simple framework made of the inevitable change of seasons and the elementary techniques of rendering raw nature hospitable. Jacobsen depicts the harshness in the encounters between people and their surroundings as well as the one between people themselves by strictly undernarrating the emotional dimension of his taciturn characters while sharing their rich knowledge of sustaining themselves in great detail. As a result, we learn more about their ways of gutting cod or selling the precious feathers of eider ducks than about the inner lives of men and women who don’t dwell in the pain inflicted on them.

This is not to suggest that the tight economy of Jacobsen’s art of storytelling would deny his readers a suspenseful line of events. A plot is slowly set into motion when Ingrid clandestinely offers a soldier of unknown colors refuge in her home and in her heart. Washed ashore on Ingrid’s poverty-stricken island from a troop carrier sunk by British planes, the survival of the badly injured man needs to be hidden from the German occupying forces. The readers, too, will get to learn only specks of his identity: Ingrid “asked whether he was a Russian and he said Da, but only after she had repeated the question three times. She asked if he was a soldier and he answered yes and no, she had never felt more attractive, and she stopped asking questions.”

Jacobsen does deny us, however, the illusion that there can be happiness in the time of collaboration and war, when knowing as little as possible appears to be as tantamount to survival as sharing even less. The brief moment in which Ingrid and her torn-up soldier “lay in the North Chamber like husband and wife” is crushed by the pitiless realities of brute force that threaten to render Ingrid helpless, if not lifeless altogether. After a vicious assault that robs Ingrid of her memory of the attack on her, she needs to set out to rebuild her sense of self as a member of a community in which it is at times impossible to tell friend from foe. Bodily harmed, she is also emotionally scarred as she and her readers are trying to reconstruct the circumstances and the motive of the assault on her.

Despite the inability of the protagonist to articulate what she is experiencing and her lack of introspection, White Shadow is a powerful psychological novel precisely because it doesn’t bother to give a voice to Ingrid. Not knowing “the difference between what has to be remembered and what forgotten,” Ingrid emerges as a cipher for a people ravaged by an enemy who has taken more than just their land and homes. Over the course of the novel, it becomes clear that White Shadow is a powerful psychological novel about a people’s devastation by the war and their subsequent attempts at reestablishing order out of persecution; loss of property, memory, and honor; of poverty; and of nameless crimes. The narrowly constricted world of Ingrid’s tiny island—which in the first part of the Ingrid Barrøy trilogy could still be told as the story of a family—has been shattered and is replaced by the story of the displaced “Finns and Lapps,” no longer “kept separate from the Norwegians,” as they join Ingrid in rebuilding her home.

Don Bartlett and Don Shaw offer a translation that conveys the book’s regionalisms (“Ingrid told him to clear off, an’ don’t show tha face hier again”) as well as the bone-dry cadence of a prose whose sentences tend to be anticlimactic—just like the lives that they tell.