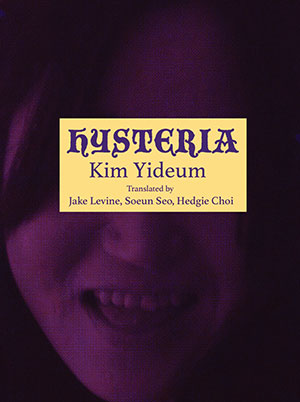 There is poetry that tries hard to be poetic, and there is poetry that tries hard not to be poetic. Kim Yideum’s poetry is the second sort. Yet poetry is poetry, and Kim’s poetry is also poetic in its way, the antipoem, whose practitioners involve anti-establishment poets the world over, with Nicanor Parra leading the way. Antipoetry can be described through its key features, and these characteristics define Kim’s poetry as well: a deliberately prosaic tone and form, an interest in spoken language, and the use of irony.

Hysteria is Kim’s fifth book of poetry and the second translated into English. Kim’s poetry is full of a sentiment of fedupness, of notgoingtoparticipateness—“futility and vigor” as well as intrepidness. The book reminds me of the physical law that governs magnets: how the force of repulsion is proportionate to the force of attraction. Jake Levine, one of the translators of the volume, writes that the difficulty of Kim’s poetry comes in part from her rejection of the decorum and rules of mainstream poetic circles in Seoul. (This is articulated by Kim herself in an online interview with the translators.) Being a homogeneous—and still manifestly Confucian—country, South Korea imposes a strong compulsion to conform. If a person has the inclination of personality and is strong enough to rebel, then that rebellion will be markedly hell-bent, slightly crazy, and fiercely independent.

In form, these poems range from conventional left-aligned poems arranged in stanzas, to many prose poems, to some poems that while left-aligned treat line breaks with close to absolute disregard. Many of the poems trace out terrains of action, and put together with a strong use of the first-person pronoun “I,” these terrains define the setting for dramatic monologues. But these are far from the dramatic monologues of Robert Browning, far even from those of James Tate. Here, rather normal scenarios get transformed into settings for rage and nightmare. In “Hysteria,” the volume’s title poem, the speaker writes of a passed-out man on the subway, collapsed upon her: “I want to rip you apart with my teeth. I want to tear you to death on this speeding subway. Hey, you groping, hey, hey, hands off! . . . I want to kill the motherfucker.” This is not exactly a strange flight of fancy for those familiar with big-city subways, but it’s the way that sentiment is expressed—and that it’s expressed at all—that is remarkable. Does the expression identify taboo? Is the breaking of taboo itself integral to art?

In “Night Traveler 2,” the speaker casts doubt upon the presumed goal of poetry—communication: “Communication? What communication? I try to go deep, but I’m barely a few centimeters in.” However you put it, this sentiment is an effective measure of the reader: while “deep” and “shallow” are riddled with too much bias to communicate much, what a reader wants from poetry is questioned, and, equally, what reactions to poetry are considered legitimate enters into consideration as well.