The Secret in Their Eyes by Eduardo Sacheri 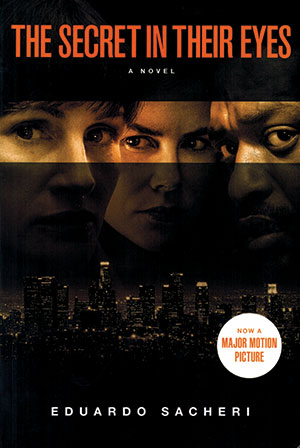 This edition is a movie tie-in re-release of the 2011 translation and features artwork on the cover with the faces of Julia Roberts, Nicole Kidman, and Chiwetel Ejiofor, who starred in the “Major Motion Picture” based on the novel and released last year. As it turned out, the movie wasn’t so major and disappeared as quickly as breath on a mirror, and this despite the success of the 2009 Argentine movie based on the novel, which won the Academy Award for best foreign language film as well as dozens of other international awards. If you have to watch one of these, watch the Argentine production, but a far better choice is to read the novel, which is compelling from beginning to end and far richer in detail.

The protagonist, Benjamin Chaparro, retires from his work in the investigative court and sets out to write a book based on an unsolved case that torments him, the rape and murder of a young wife in her own bedroom. His writing also stirs his memories of his love for Irene Hornos, an intern at the time of the murder but now an important judge. The “Dirty War,” in which the Argentine government practiced vicious political persecutions and “disappeared” at least thirteen thousand people from 1976 to 1983, also becomes part of the story, endangering Chaparro and imbuing a Kafkaesque suspense to everything he does. Ultimately, the question of justice—what it is, who is entitled to it, and to whom it belongs—makes this book much more than an ordinary thriller.

It isn’t always true that the book is better than the movie (or movies in this case), but it is certainly true of this novel. Sacheri is a masterful storyteller, and the translation never has that slightly-too-careful quality we often find in translated crime novels. This is one of those unusual novels that lifts the simple context of the thriller to the complex emotion and intellect of the best literary novels.