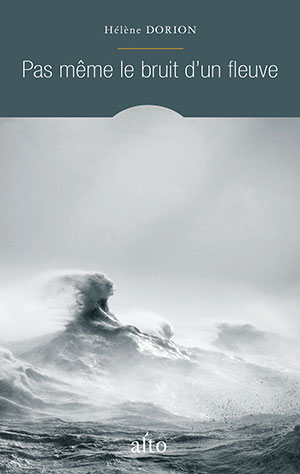 “LIKE A BRIDGE over troubled waters,” Hélène Dorion watches over the flow of words-thoughts-images-emotions that carries Hanna through her discovery of family secrets. She delimits Pas même le bruit d’un fleuve (Not even the sound of a river) with quotations from twenty poets positioned as titles for the novel and its chapters. She uses external texts to rhythm her own prose: a casualties list, newspaper clippings of fluvial tragedies on the Saint-Laurent River, and notebooks, poems, postcards, and pictures left by Hanna’s mother, Simone. In this polysemic message, Dorion and Hanna compete for the narrative voice as Hanna speaks sometimes in the first person and sometimes in the third person, in a subtly unsettling shift between autobiography and fiction. Finally, Hanna’s understanding of her emotional meanderings comes through her friend Juliette’s words. Who, then, is the novel’s main character? Dorion, Hanna, her mother Simone, her grandmother Eva, or her friend Juliette?

As Hanna travels to Simone’s hometown after her mother’s death, a four-hour riverbank drive from Montréal to Kamouraska, both the river and the family story widen. Little by little, Hanna connects her memories of Eva and Simone to “The Majestic,” as the Saint-Laurent is called. Eva and Simone lost their fiancés, their first loves, to the river. Both settled for loveless marriages to avoid bringing shame to their families. Social mores are evoked in filigree, Mavis Gallant–like, through two world wars and the plight of immigrants. The result is a collective portrait of womanhood with a feminist concern for the domestic and sexual constraints of early twentieth-century Québecois society collared by Roman Catholic morality. Dorion’s description of love’s phantom pains buried in deep silence is masterful.

A river of immigrants’ arrivals and soldiers’ departures, the Saint-Laurent has rhythmed the lives of Québecois people from the beginining; its waters dictate the fate of the country. The riverbank is a place of solitude, solace, and remembrance. The river feeds, nurtures, loves, kills, buries, and memorializes. Its formidable presence reduces human time to brief surface glimmers. The river took away Eva’s fiancé, who died in 1916 on the battlefields of France; Simone’s fiancé, Antoine, lost his Irish immigrant parents in the sinking of the Empress of Ireland in 1914; then he drowned in his sailboat in 1949. Simone’s life henceforth belonged to the river in which she swam deeply, as if possessed by a death wish:

One day, I saw my mother enter the sea as if she were embracing a beloved body, as if the violent movements of the waves against her hips were those of a lover to whom she was abandoning herself. For her, the water was not icy, the sun was not burning her skin. The wind swept her hair back, showing the beauty of her features and making her anchor her feet more firmly in the sand. Was her gaze searching for something far out, was she waiting for the sea to throw its flotsam to the surface like the echo of her memories? Then, my mother became an unknown woman to me, once again. After a long moment, Simone turned around and came back toward the beach, her face wet with tears and spray, her body spent, shattered by a strange confrontation with herself. (Trans. Rosalind Brackenbury)

Her serenity in the face of cancer and death mirrors that of Antoine, who died in the manner of Virginia Woolf, entranced in The Divine Comedy while his sailboat sank. For both of them, faithfulness to loved ones superseded their will to live. For Hanna, this realization is life-changing: accepting the law of the river leads her to a symbolic rebirth and to the affirmation of life, art, and freedom.

To prolong her ode to the Saint-Laurent, Dorion offers a musical selection by sixteen contemporary composers to which she listened while writing and proofing her manuscript. These pieces are a mix of classical contemporary musical styles, alternative popular music, film scores, and experimental music in the postrock genre. Their music of the waves tells of poignant partings and peaceful surrenders in which minimalist sounds alternate with desperately passionate chords, helping turn a family story into a mythical saga of the Québecois people forever tied to the Heraclitean universe of their majestic river. Dorion, who devoted two previous novels to her parents (Recommencements, 2014; Le Temps du paysage, 2016), often uses music and photography to showcase her work. Pas même le bruit d’un fleuve earned her the prestigious 2019 Prix Athanase-David for her lifelong literary creation.