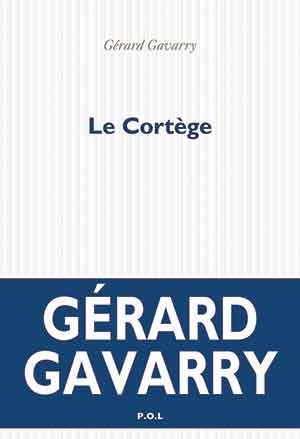 READERS FAMILIAR WITH his work know Gérard Gavarry as a master of French prose style as well as a writer who comes to each project with a fresh perspective, determined to stake out new territory in each of his books. Le Cortège is his most recent novel, and it may be his best yet. The tale he tells here involves the final voyage of a freighter, the Nauplios, which leaves the port of Ermoupoli in the Greek Cyclades, bound for West Africa, where it will be broken up for scrap. Mostly empty of cargo, it will nonetheless transport a Bentley in its voluminous hold, plus a consignment of more clandestine merchandise, some of which is destined to be transferred to another ship, well offshore, far from the prying eyes of land-based authority, in a moment of spectacular tension.

This is a story of the sea, and like other such tales that come to mind, the ship serves as a narrative crucible, melding the stories of the crew and the passengers. Those individuals are a varied and colorful bunch. There is Franky, the commanding officer, a man of stern stuff and unwavering nerve. He is seconded by his first mate, Mirko, a Croat with a long seagoing career behind him. There is Kashi, the ship’s cook, and Augustin, the steward. There is Houessou Houessouvi, known more familiarly as Wéwé, the owner of a security company who enjoys a well-deserved reputation as a sharpshooter. There is Gu, a shadowy, saturnine figure who may be a writer. Most intriguingly, there are Perpétue and Jean-Fa, children either distantly or more closely related to Wéwé; their curiosity about the ship and all things nautical animates this novel, stoking our own readerly curiosity in crucial ways.

Gavarry plays upon our curiosity strategically, leaving certain questions unanswered in the story he tells, most notably questions we might have about Perpétue and Jean-Fa. Why have they embarked upon the Nauplios? From where did they come? Where are they going? As vexing as they may seem upon first consideration, those narrative lacunae provide us with significant room for speculation, inferencing, and creativity.

Likewise the notion of the cortège. It is an open concept, one that Gavarry puts to work in a variety of registers. There are corteges, processions, cavalcades, parades on land and at sea in this novel; there are arrays of ideas and themes; the sumptuous prose that Gavarry writes advances in an orderly direction. That same principle extends even to the level of the sentence: “Comme si la cité entière observée un instant plus tôt n’avait été qu’un mirage, l’horizon désormais regardé à l’oeil nu était partout le même, pas moins vide au nord qu’au sud, à l’est qu’à l’ouest” (As if the entire city, glimpsed an instant ago, had been nothing more than a mirage, henceforth the horizon, seen by the naked eye, was everywhere the same, no less empty to the north than to the south, to the east than to the west). Corteges are inherently narrative insofar as they put stories on display; and clearly, among its several other purposes, Gavarry’s novel is concerned with storytelling itself, with its conditions of possibility, its potential, its limitations, and its very considerable pleasures.