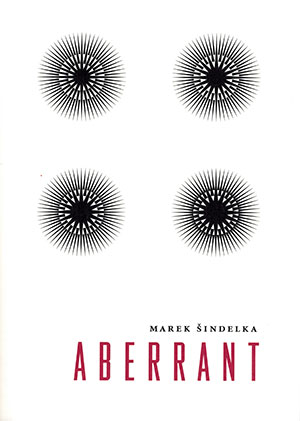 Aberrant is a deliberately paced novel. Dealing as it does in sensory description, the narrative is by turns immaculately beautiful and incredibly boring.

I won’t judge this as a crime novel, because it’s not that (though it’s billed that way in the ad copy). I also don’t see it as an “ecological revenge fantasy.” Instead it reads like a series of synesthetic impressions linked together by moments of brief character work. Along the edges of the narrative are suggestions of structural daring and multilayered mystery, but none of it is fleshed out or explored.

Marek Šindelka’s narrative, such as it is, concerns Kryštof Warjak, a smuggler of rare plants. He is tasked with retrieving a parasitic rarity from Japan. The plant is pitch black, a pure embodiment of sadness and misery. Warjak and his prospective buyers are pursued by a demon that possesses the bodies of those it touches. There is a scene with a plastic bottle of Coke that shows sadistically entertaining imagination.

Warjak’s childhood friend Andrei takes up a section, as does their mutual friend (and third point on the love triangle) Nina, though her character is barely addressed at all. In fact, as soon as the book begins to flirt with this aspect of its plot, it shies away, shifts temporally, goes somewhere else. Most of the sex and violence takes place “off-camera,” which is really a shame, considering the narrative’s pulpy premise.

Šindelka’s writing is truly something to behold, and that’s why the book is worth reading. The copy does its best to sell the book as a thriller, or a magical bizarro fable, but what makes it work are the long passages in which the author describes train stations, flooded cities, greenhouses, and the plants therein. Despite a few repetitions of sensory input (the smell of metal left from a person’s palm having touched a railing, for example, is used over and over again, almost a motif), the language is crisp and clear and frankly quite beautiful, a tribute to both the author and Nathan Fields, the translator.

Aberrant is difficult to put down, but not for the reasons its packaging would have you believe. As a gripping thriller, it is a complete failure. Toward the end of the narrative, Šindelka decides to take a ten-page detour into the boredom and stress of waiting for a train to leave a station. As a character study it also falls flat, as Andrei and Nina and Kryštof are prone to either long, unnatural diatribes on the nature of plants or over-the-top displays of emotion and grief (disappearing into the woods for days at a time, stripping naked, rubbing mud all over their bodies). This is, I suppose, a novel that really does seem to understand its immediate outer world better than anything interior. The journey through a flooded Prague, through fields of poisonous hogweed, through back alleys littered with cigarette butts is one worth taking, if you’re patient and willing to take it.