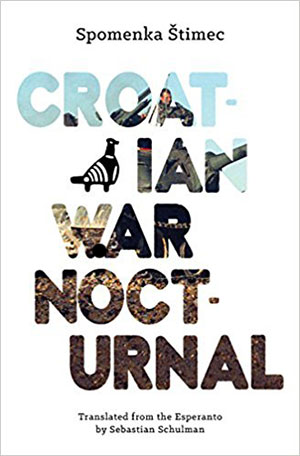 The Balkan Wars spawned literature across genres, in languages from émigré English and German to nascent Serbian, Bosnian, and Croatian. But Spomenka Štimec’s “fictional memoir” occupies a unique position. Defying the outcome of that war—six new nations, each comprising a dialect with an army—its language, Esperanto, from sperare (to hope), also functions as its theme. Each word embodies the aim of Zamenhof, who founded Esperanto in 1887 to transcend national boundaries and unite the world.

Esperanto connects the eleven segments of this nocturnal (not a diary, its Latin root, nox / night, opposing dia / day) that capture the dark realities of the time. The typewriter of Štimec’s persona belonged to the Distributed Language Translation Project, a Dutch effort from 1985 to 1990 to enable machine translation using Esperanto as the intermediary language. On it this Esperanto Center employee, her visits to Serbia “a trip to our Croatian great-grandmother,” her annual holidays with Serbian cousins a “circle of harmony,” nightly records her experiences—Zagreb’s air raids, Vukovar’s destruction, Sarajevo’s siege, blossoming nationalism, separation from family, the death or disappearance of Esperanto colleagues.

In Štimec’s epigrammatic style, irony both mediates and underscores horror, highlighting the absurd consequences of war (e.g., the hurdles faced when trying to ship a dead soldier’s body to his native France, revealing “the politics of storing the dead,” or the endless steps required to bury a friend). A spare lyricism likewise builds this somber portrait of national, local, and personal loss, as when “the scent of scorched memories spread from Sarajevo out into the world,” or phone calls “from a country at war” become “dark and spare. Subject, predicate, object.”

Three vignettes follow the fate of Pero, a middle-aged father and non-nationalist doctor who once translated Croatian poetry into Esperanto but, mobilized, now wears boots “not yet implicated in anyone’s murder.” His request for a washcloth renders this humble object a trope for normalcy. But when it arrives, “death had already wiped its hands” on it. Pero’s family struggles to obtain the necessary documents and diminish the state’s presence at his funeral, “attended by Esperantists from all over Europe.” Composing his eulogy, the persona finds each verb a trial: “My love for him liked the present, and only begrudgingly ceded him to the past.”

Two excerpts interspersed among these vignettes presage the cycle of violence this text protests. In Krleža’s Mars, God of Croatia (1922), the Catholic symbols on Croatian military uniforms render Christ “a barbaric fetish that soldiers condemned to death pin onto their filthy shirtfronts,” while Zamenhof’s After the War (1915) asks diplomats to rule that “every nation equally belongs to all of its sons.”

Quiet, evocative, Croatian War Nocturnal ends on an elegiac note. The persona seeks motivation from her volumes in Latin and Cyrillic scripts, “written in and inspired by Esperanto . . . the world’s only flag unstained by human blood.” But in this new Croatia wed to jingoism, “The books stood silent.”