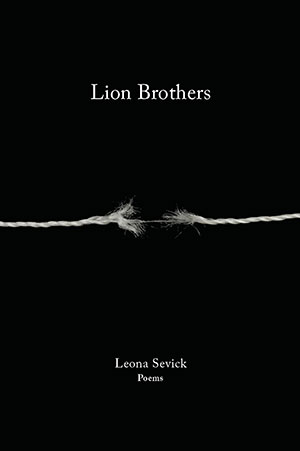 Lion Brothers, Leona Sevick’s first full-length poetry collection, is named for the textile factory where the poet’s Korean mother worked. While the collection is, in part, about the poet’s working-class parents, it is also a profound exploration of domestic life and its discontents.

“I have something to tell you,” a seemingly benign sentence, is the emotional whirlpool around which Lion Brothers swirls. In its first speaking, the sentence is directed to the poet’s mother by her husband, the poet’s father. In the second, it is directed to the poet-speaker by her own husband, and, both times, it is a prologue to the husbands’ confessions to infidelity. Figuratively, the poet-speaker may be heard whispering the same sentence—telling herself and her readers some things.

A short excerpt from “Garage Door” illustrates both the tone and the unvarnished veracity of the collection. “I watch you spread the ladder’s legs far enough // to support your hulking frame. And, as you balance / on your good shoes, the ones you like so much, // I almost wish you wouldn’t fall.”

Despite centering on formidable subjects such as racism, motherhood, and the suffering of children, the poems never stoop to melodrama. Instead, they are exquisitely crafted, often shockingly honest evaluations of the poet’s interior landscape, delivered in a singular voice sometimes tinged with the sardonic but never with self-pity.

For example, in “Wait for It,” the poet-speaker watches her son catch, then eat, a crab, “snapping off / its pereopods to suck at their hinges, cracking open / the propodus so he can dig at the meat.” The primal violence is palpable; the speaker discloses that when watching her son she “shudder(s) at this creature I couldn’t have made.”

In a poem set early in the collection, the lion’s heart of the collection reveals itself, although readers might not fully recognize this poem’s importance until the second reading. “And, afterward, poking through the smoking / ash heap of this conflagration, / I will search for remnants of my humanity / I might salvage, still.”

Leona Sevick chaperones her readers through an emotional and psychological journey that makes us better human beings for having accompanied her.