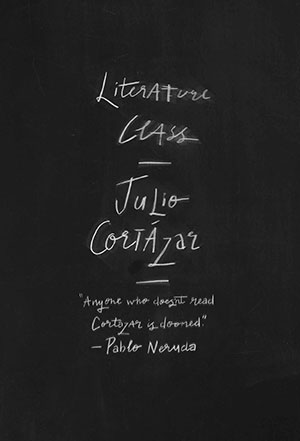 When one thinks of Argentine literature, two names immediately come to mind: Jorge Luis Borges and Julio Cortázar, usually in that order. I read them both assiduously as an undergraduate Spanish major at the University of Oklahoma, where both had delivered lectures, in 1969 and 1975 respectively, as invited fellows to the Puterbaugh Conference on Writers of the French-Speaking and Hispanic World (known today as the Puterbaugh Festival of International Literature and Culture).

When, in October and November of 1980, I was reading Cortázar’s short stories “Axolotl” or perhaps “Casa tomada”—I had not yet begun to tackle Rayuela—and listening to anecdotes from my professors who had spent time with Cortázar during his brief stay in Norman, one hundred students at the University of California at Berkeley were attending a minicourse, made up of eight classes, taught by the late novelist and short-story writer.

Structurally, Literature Class is comprised of eight classes, transcribed from thirteen hours of recordings, labeled simply 1st Class, 2nd Class, etc., and two public lectures, which appear as Appendixes I and II. Thematically, the lectures, or classes center narrowly on Cortázar’s own oeuvre and broadly on the Latin American canon. Entitled “A Writer’s Paths,” the first class is largely biographical before going on to introduce students to the historical antecedents of the short story as a genre and its impact on Latin American literature. The second class, “The Fantastic Short Story: Time,” opens, not unlike any college class, with a “logistical announcement,” in which Cortázar, now an American professor, announces additional office hours to meet the demands of his students, before going on to offer a historical panorama of the roots of the fantastical short story in Latin America. Classes 3 and 4, “The Fantastic Short Story: Fate” and “The Realist Short Story,” respectively, continue the author’s foray into this genre. In the fifth class, Cortázar departs from the short story to discuss the themes of “Musicality and Humor,” while classes 6 and 7 are devoted to the author’s magnum opus, Rayuela, Hopscotch in English. The eighth (and final) class is titled “Eroticism and Literature.”

Literature Class concludes with two appendixes, “Latin American Literature Today” and “Reality and Literature: With Some Necessary Inversions of Values,” which, as already stated, were public lectures delivered in Berkeley to packed audiences. The first of these appendixes requires little explanation. The topic of the second, however, is not as apparent. It speaks to, and about, an inevitable convergence of a new geopolitical reality, which emerged in Latin America in the wake of the Second World War, with a new literary reality. “Like Coleridge’s ancient mariner,” he writes, “many Latin American writers woke up ‘sadder and wiser’ during those years, and this awakening meant directly and deliberately confronting the extra-literary realities in their countries.”

As in any university class, the lectures are interspersed with student remarks and questions, some insightful, others bordering on the banal. The effect, however, that Cortázar had on his students—as ill-prepared as they may have seemed to him to be—and the affection, at least admiration, they developed for him, is palpable, such that when, at the end of the seventh (and penultimate) class, an obviously fatigued and by now disinterested Cortázar muses, “I don’t know what we are going to do next Thursday. I don’t feel like doing anything at all because it’s the last class, my last talk. [. . .] Here’s a good solution: let’s not even meet!” the students respond in chorus with an emphatic “Noooooo!!”

Literature Class is translator Katherine Silver’s thirteenth title for New Directions. Although Silver’s translation is capable, when English readers read, “I want you to know that I’m cobbling together these classes very shortly before you get here,” they are reading Silver’s voice, not Cortázar’s. Consider the original, which reads, “Tienen que saber que estos cursos los estoy improvisando muy poco antes de que ustedes vengan aquí” [You must know that I am improvising these courses very shortly before you come here]. My objection to this translation is not Silver’s grammatical transposition of “Tienen que saber” to “I want you to know,” but rather to the semantic shift that occurs between “improvising” and “cobbling together.” To say that one “cobbles something together” is to suggest that they have done so not only hastily, as the Spanish improvisar suggests, but also “roughly” or “not very carefully.” There is nothing rough or careless in these lectures.

And although Silver peppers the translation with occasional and useful footnotes (one on page 76 explicates a humorous wordplay), one comes away wishing she had added a translator’s note, explaining perhaps why she decided to add the adjective “strong” before the noun “desire” when Cortázar discusses his first trip to Cuba in 1959, following the triumph of the Revolution, or why she italicized the adjective “historical” before the noun “stage” at the beginning and end of a paragraph in the 1st Class, an italicization that does not occur in the original. This reader also wishes that New Directions had included the prologue penned by Cortázar scholar Carles Álvarez Garriga for the Spanish edition, in which we learn, for example, that Cortázar had to “lower his aim” and was unable to teach the classes as he had hoped because of the students’ dearth of knowledge of the material, or that he found his meetings with students during office hours to be tense.