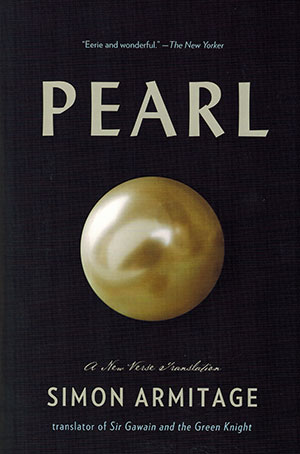 Pearl is a rich and deeply complex poem composed during a period of radical change in the English language. The poem’s complex structures occur at the level of the line, the stanza, the section, and indeed the whole poem. Within the line, the poet employed both the alliterative verse familiar to previous eras and also a strict end-rhyme scheme that would have pleased his contemporary readers. The stanzas are linked by repeated phrases and near refrains, and the ending stanza echoes the first. Beyond concerns of craft, Pearl is a poignant narrative of grief, longing, love, and faith.

Written roughly in the same period as The Canterbury Tales, the dialect of the poem is further from Modern English than Chaucer’s. The obscurity of the language multiplies the problem of translation already made difficult by rhyme and repetition. In his readable yet scholarly introduction, Armitage notes the word adubbement as an example. The word’s original meaning is doubtful, so it has been translated a number of ways. Since this word or variants opens and closes most of the stanzas in section 2, this is no small choice. Describing the choices other authors have made in translating Pearl, Armitage relates his own consideration of producing a “translation” versus a “new version.” Choosing the former, Armitage presents as faithful a translation as one could want. He refrains from using archaic language to highlight the strangeness of Pearl’s English. He employs end-rhyme only when it can occur naturally, without invention or syntactic inversions; however, he maintains the alliteration.

The result is a poem that feels both true to its source while pleasing to a modern reader. The facing-page version is excellent for students of language, and the book is appropriate for teaching either linguistic history or poetry, though the page texture, lovely to the touch, doesn’t lend well to penciled marginalia. No matter—I was so often lost in the craft and story that I forgot to make many notes. The original is a masterpiece, and Armitage certainly does it justice, but Pearl is not a difficult poem. It is an engrossing piece of craft, and the father’s ache for his deceased daughter, his “precious pearl,” is palpable to anyone with a heart.

Armitage observes that Pearl is known only from a volume belonging to the famous Cotton library and that four poems in the volume are in the same hand. The dialect, style, and skill of the poet leads scholars to believe these were not merely copied by the same scribe but composed by one person. Simon Armitage has now tackled two of these works: Sir Gawain and the Green Knight and now Pearl. Perhaps two further volumes are forthcoming? That would make a nice set indeed. (Editorial note: Read an interview with Simon Armitage from this same issue.)