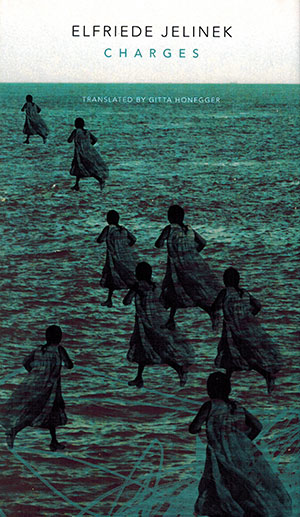 Elfriede Jelinek adopts the narrative structure, setting, and themes of Aeschylus’s Suppliant Women for Charges, a drama that delivers a powerful, raw, emotional depiction of the refugee crisis that is currently playing out on a global scale. The Nobel Prize–winning author witnesses via television and other media—she is an agoraphobe—the plight of a group of refugees from Central Asia and the Middle East, who arrive in Vienna in November 2012 and set up camp in front of a church near her home. Jelinek uses these events as the backdrop for writing her own tragedy. The local populace engages in an intense debate about what to do with these illegal immigrants, politicians and the media get involved, and some of the refugees take shelter inside the church where they go on a prolonged hunger strike.

At the same time that this humanitarian tragedy is unfolding, a world-renowned Russian opera singer and Boris Yeltsin’s daughter, both very wealthy with powerful political allies, are given citizenship. While the refugees from the church are shuffled off to a monastery where they can be kept out of public sight, these two privileged women are bestowed with the freedom and honor of asylum and naturalization. Jelinek often contrasts the poverty of the refugees with the privilege of these two women throughout her play. When speaking about these two women and the extreme contrasts in their struggles for asylum, the chorus’s tone becomes decidedly angry about the blatant favoritism based on wealth.

By using a chorus as her protagonist, in the tradition of an ancient Greek tragedy, Jelinek employs several dramatic techniques to get her point across emphatically about the desperate and sad plight of the refugees. For instance, as is common in ancient tragedy, the chorus in Charges repeats itself, in a rhythmic way, circling back often to the same themes and topics. In addition, punctuation and connectives are dispensed with in order to give their speech a vehemence that conveys the deplorable hardships which the refugees have suffered and continue to suffer: “We lie on the cold stone floor, but this comes hot off the press, here it is irrefutably, irreconcilably, poured into this brochure like water that instantly runs down and out instantly, like water thrown from cliff to cliff, turned into water as well, sinking like statues, almost elegantly, with raised hands, no, no, from dam to dam, into the bottomless, into the micro power plant, down, down it goes for years, we vanish . . .”

Jelinek has brilliantly adopted the medium of the ancient Greek poets in order to enlighten us about those who have been exiled from their homes and cannot return safely. Although she uses the scenario that takes place in her hometown as the backdrop for her drama, Jelinek chooses not to mention Vienna or other specific place names in her text; she makes her themes of displacement, fear, and privilege universal, ones that can be applied to any of the current refugee crises we see playing out on a daily basis in various parts of the world. By speaking about their hardships and abuses in one loud, emphatic, emotional voice, the chorus of refugees in Charges delivers the timely message that we should treat the displaced with dignity, kindness, and generosity instead of with disgust and xenophobia and recognize that this has become a human rights crisis of epic proportions.