Vis & I by Farideh Razi 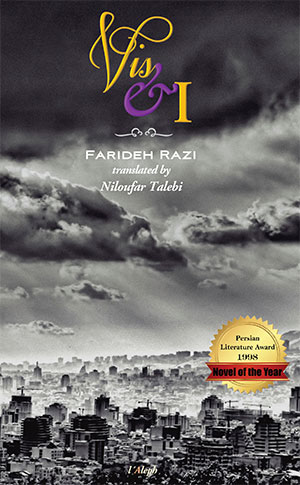 Vis & I is a love story but also, or even more so, a story of soul searching. An allusion to Vis & Ramin, an eleventh-century Persian epic love poem by Fakhruddin As’ad Gurgani, the story invites us into a woman’s struggles as she tries to make peace with herself and with her love and desire for a lover, in a time of war and prohibitions, in a place that questions her selfhood and her womanhood.

Vis & I is written in the form of an internal monologue, moving constantly and with not much transition between past and present. Scenes from the narrator’s childhood mingle with those dispersed throughout the years she has known the lover, a composer, with those from the last time she saw him and told him to go, words she regrets now and is thus trying to make up for by heading to the airport to stop him from leaving. It is on this taxi ride that we accompany the narrator into the whirlwind of her mind and her emotions.

The whirlwind is further emphasized by the split character of the narrator. There is Pardis, the narrator, but there is also Vis, who, we learn as we read on, is the wild woman within Pardis with whom she is in constant tension and conversation. There is also the “you” who is sometimes Ramin addressed by Pardis in her mind and sometimes Pardis addressed by Vis. And then there is war as well, the eight-year Iran-Iraq War that serves as backdrop, redefining everything and everyone under its shadow.

In the taxi, Pardis thinks and remembers and questions and revisits and tries to make sense of herself, of Vis and their relationship with each other, of the lover and their relationship, and of the world around her. Her mind wanders, allowing us to watch her and Vis joining the lover in his car while others sleep not too far away on a hill; watch houses collapsing; her and Ramin getting arrested and punished by the moral police; friends getting injured and dying; a kid going mute; her waiting in the alley watching the lover’s window; a deformed baby being born; her and Ramin searching amid the rubble; her father reprimanding her for the relationship; her ending up in a hospital; and many other moments.

As the scenes begin to pile up, Razi’s style of writing makes the present and the past move between the realms of reality, memories, and hallucinations, allowing her to characterize a restless soul in pain who tries to meet loss in the eye, not just the loss of the lover but also that of the self and the others gripped in the chaos around her.

Razi’s decentered, fluid narrative perfectly matches the mood and experience she is trying to capture. It, however, sometimes feels too much: too many shifts happening, in time (as well as verb tenses) and in perspective; too many people and events that are touched upon without becoming flesh and blood for us to be able to grasp them; and too much philosophizing that after a while can feel empty. You might find yourself yearning for more concrete grounding. If you are patient and willing to tackle the confusion, though, you will be able to think and feel so much within the distressed, exploded reality that is the beautiful inquiry of Vis & I.