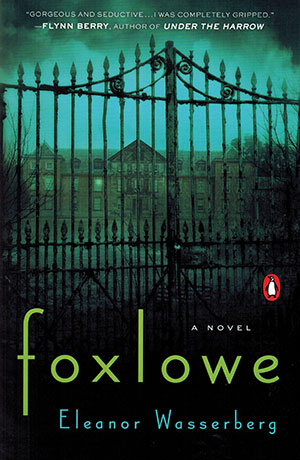 A commune-turned-cult cut off from the rest of the world is undone from the inside by one little girl and a woman’s capacity for violence.

Green has known no life other than the one she lives with the Family at their sprawling and decrepit estate known as Foxlowe, an isolated mansion on the edge of a moor. The Family live a simple life, in which everyone must contribute to the good of the group. Children, or ungrowns, do not attend school, and although adults—including the enigmatic and volatile Freya—punish them in harsh ways, Green enjoys living together in the large house. But the Family’s darker facets come to light when Blue, a girl younger than Green who was brought to Foxlowe as a baby, becomes interested in life beyond the gates of her home. She’s accused of being touched by the Bad, an all-feared force that the Family uses ritual to drive out. But Blue fights back, bringing about the collapse of life at Foxlowe and forcing the Family out into a hostile world with which they aren’t prepared to deal.

From the book’s opening pages, UK writer Eleanor Wasserberg holds her cards close to her chest. Green makes clear early on that she’s telling the story of Foxlowe’s end, but it takes time to tease out what that means. Freya uses a toxic blend of cruelty and kindness to manipulate Green’s loyalty, an early indicator of the woman’s capacity to hurt others. The ultimate question is how far Freya and the others will go to make their vision of a utopian community real and how many lives they will ruin in order to enforce their rules. Fear and love walk hand in hand through Foxlowe, something Green struggles to deal with even after being forced to integrate herself into society in London, where she becomes an alcoholic and has difficulty learning how to read and write. Although a break in the book’s linear structure disrupts the insular and claustrophobic tension that pulls the reader along, the conclusion is at once heartbreaking and terrifying.

Foxlowe is a fascinating and gripping read about a world unto itself and what happens when the that world’s barriers come violently crashing down.