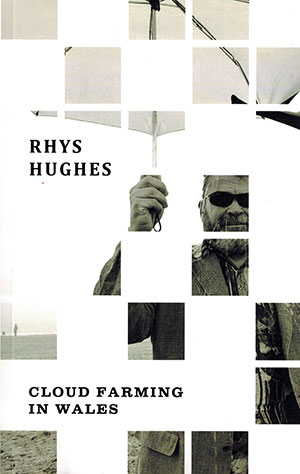 Prolific Welsh author Rhys Hughes is thoroughly wrung out. While Wales is not quite the wettest place on earth, it sure comes close. In his latest book, Cloud Farming in Wales, Hughes steps outside to let his thoughts frolic among the wetness. Richard Brautigan once captured that cabin-fever feeling in a poem written in California: “It’s been raining like hell all day long and there’s nothing to do.” What’s more, Hughes declares utter devotion here for Brautigan’s writing—particularly Trout Fishing in America, which seems to have inspired many concepts in Cloud Farming in Wales.

Hughes begins the slim book by introducing a cloud farmer named Wilson, “a man in a smock and floppy hat” with a long beard and a shepherd’s crook plus “a large key protruding from his back.” Throughout, Wilson enters and exits the stage—and he’s right there on the final page swinging his crook and pointing it at the author. Wilson keeps the momentum going, but it does wilt a bit toward the end.

Hughes sprinkles lovely sentences throughout: “The clouds are curtains drawn over the face of the sky of Wales.” Creative rhetorical devices abound. He calls clouds “sky sheep” and sheep “ground clouds.” He notices a man “out at night walking his shadow.”

Writing topics such as the Oxford comma, books, or WIPs pop up as minithemes. He deliberates the difference in words written by clean versus dirty hands. He weighs the merits of employing metafiction as a novel’s frame.

Characters? Besides steampunk Wilson (the Clockwork Man), there’s Karl Mondaugen (reminiscent of Thomas Pynchon’s Kurt Mondaugen), the Queen, Primella Limpet (anime + mollusks?), Dutch tourist Van der Graaf (à la physicist Robert J. Van de Graaff, perhaps, who was of Dutch descent), Cthulhu (think H. P. Lovecraft’s interstellar octopus), Birdman Boyo (maybe a mashup of rapper Bryan Williams + reggae artist Billy Boyo), and Dr. Oxygen and Mr. Hydrogen (who dispute just who’s holding on to the other in their relationship). How does Hughes view the folks in his book? “There are only two real characters in this story: the reader and the author.”

Hmmm, how to classify this book . . . fiction? nonfiction? essay? memoir? eco-fiction solarpunk? Here’s how Hughes categorizes his slim volume: “It is just me saying stuff about things.”

Things like empathy contrasted with compassion, the height of the Dutch, Margaret Thatcher’s opinion of “people who travel on buses,” distinctions in speaking Welsh / Spanish / Portuguese, or a birthday-telegram command from the Queen. Hughes disses marriage, ponders germs on books, hashes out the meaning of how a message is conveyed.

Right in the middle of an intellectual discussion, though, he’ll make you laugh out loud over your macchiato—and then groan over another pun.

As Rhys Hughes says, “That’s Wales for you.”