Brutus and Other Heroines: Playing Shakespeare’s Roles for Women by Harriet Walter 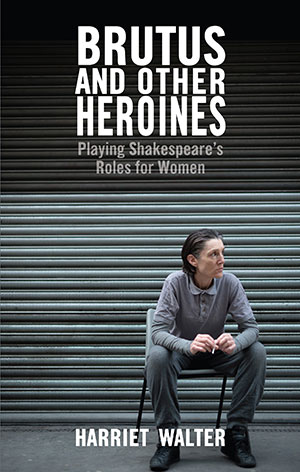 British actress Harriet Walter (who won a Tony Award nomination for Mary Stuart on Broadway in 2009) offers feminist essays on major Shakespearean roles for women as well as some of the male roles. Her chapters on Ophelia, Imogen, and Lady Macbeth are abridged or edited versions of earlier incarnations elsewhere (Players of Shakespeare and Clamorous Voices, for instance), but her collection (while neither an academic treatise nor a practical handbook) is a kind of autobiography spanning over thirty years of her career, moving from female roles of great vulnerability (Ophelia, Helena, Imogen) to those of confident complexity and wisdom (Beatrice, Portia) and culminating in a Cleopatra of genuine insecurity.

When Walter was offered three “trouser roles” in 1987—her Year of the Boy—she was able to discover how Shakespeare’s women use disguise variously and for different purposes: to get a job in an exclusively male court (Viola); to survive outside the court (Rosalind); or to enter a world from which women were normally barred (Portia). The essays show a deep study of text, though some of the supplementary resources (such as consultations with psychiatrists, bereavement counselors, or prisoners) could seem excessive to those who put a primacy on the actor’s imagination rather than on psychiatry or sociology. However, the theatrical results, according to her evidence, bore good fruit (especially for interpreting Lady Macbeth), though her take on Beatrice as “an old maid” (something becoming ever more prevalent in our time) is idiosyncratic, if not downright wrong.

The most provocative sections of her book are, of course, the essays on Brutus and Henry IV, and her cordial letter to Shakespeare, all of which are critical of the male template. Walter believes that if it was legitimate for boys to play women (even Cleopatra) in Shakespeare’s day, then it is equally legitimate for women to play men. Well, not necessarily, because gender illusion is usually defeated by an actress’s natural vocal pitch and physical movement. While women can, indeed, bring feminist insights to male roles, how should Lady Anne, for instance, be played opposite a female Richard III?

Nevertheless, Walter’s book presents many valuable insights from a skilled Shakespearean player’s point of view because she strives to retrace Shakespeare’s steps from word to thought to motivation to the heart of character. In the process, she offers us much to ponder as she challenges theater audiences to broaden their definitions of man and woman, hero and heroine.