City of Bones by Kwame Dawes 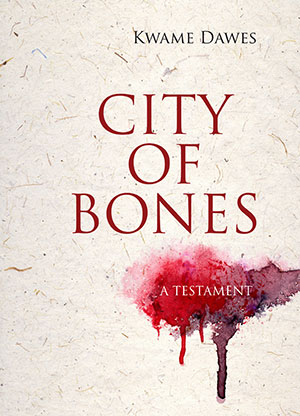 City of Bones: A Testament is an impressive collection of poems, divided into four parts, which employs a structure that subverts linearity through a constant movement from the past to the present moment. The parts are interconnected through a recurrence of imagery, symbols, and voices that speak to the complexities of the present moment and to the traumas of the past condition.

The book is part of the continuum within Kwame Dawes’s body of work concerned with exploring the contemporary Caribbean cultural experience through the lenses of the legacy. Yet it marks a departure from his previous works in placing the poems in conversation with the work of the African American playwright August Wilson. There are many allusions to Wilson’s A Gem of the Ocean, a play written in 2004 that tells the story of the Middle Passage and describes “the city of bones” in the depths of the Atlantic Ocean through the voice of Esther, one of the major characters. The very title of this collection alludes to the “city of bones” that Wilson’s play evokes.

While Dawes draws on characters, voices, and places from Wilson’s work, he artfully reinvents them by drawing on his personal experience and adding other spatial frameworks and other resonances such as blues and reggae music as well as references from the Bible. The character of Esther, for instance, is reinvented through the voice of Mama Ola, through whom Dawes conveys his vison of the future. While familiarity with Wilson’s work can enhance the reading of this collection, it is not indispensable to engage with this collection.

Moving from poem to poem, the reader is taken into different time spans and spaces, creating a sense of a “journey” to collect the fragments of the past, re-created through forceful and poignant imagery. Dawes succeeds in exploring the present condition of the African experience of the diaspora through the lenses of the past and the examination of the self with a great deal of lyricism and creativity. The continuous juggling between the past and the present as well as the use of multifarious voices—of people, spirits, and souls—that speak to the resonances of the past and to complexities of the present, while pointing to future paths, is one of the major poetic achievements of this collection.

The need to reconcile with one’s past is what the journey into the “gleaming city of celestial beauty,” around which the last part of this collection is centered, is all about. It is, Dawes seems to hint, a prerequisite to “retrieve those healing songs,” in view of reconstructing one’s identity and finding one’s voice in the contemporary present situation.