The Return: Fathers, Sons, and the Land in Between by Hisham Matar 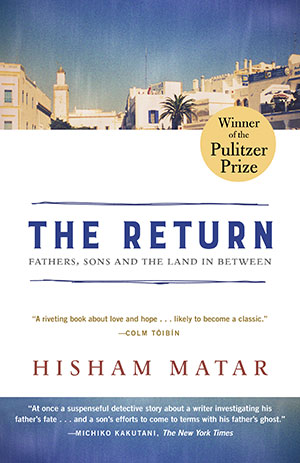 So few books manage to convey the emotional anguish of searching for an answer as well as Hisham Matar’s recent Pulitzer Prize–winning memoir, The Return. Matar grew up in Libya during the reign of Muammar Qaddafi. His father, Jabala Matar, a major opposition figure, eventually had to move the family to Egypt for their safety. In 1990 Jabala Matar was kidnapped and sent to a jail in Libya, with all news of him stopping three years later.

Hisham Matar goes on to study in the United Kingdom and become a successful novelist. Eventually, he begins his search for his father, which brings him back to Libya, in a post-2011 reality, carrying with him a palpable longing for home and for closure.

Matar’s prose is haunting, tearful, and heartfelt. He reflects on the state of being fatherless and the inner turmoil of living a dual life, writing: “To be a man is to be part of a chain of gratitude and remembering, of blame and forgetting, of surrender and rebellion, until a son’s gaze is made so wounded and keen that, on looking back, he sees nothing but shadows.”

The often-poetic memoir also includes Matar’s debates over the effects of leaving his childhood home and his hunger for a stronger connection to his roots. It also reads as an investigation piece, where he interviews his relatives in Libya and details the phone calls and illusive meetings between himself and Qaddafi’s son, the great “liberal” hope, Seif al-Islam, adding bits and pieces of Libyan history when necessary.

Ultimately, this memoir summarizes to perfection the identity conundrum and dreams of return faced by so many exiles and those who flee war. It is also a state of reality understood by so many today, especially second-generation Arabs who grow up in different cultures.

He writes, “My feet were heavy. I noticed how old I had become, but also the boyishness that persisted, as if part of me had stopped developing the moment we left Libya. I was like David Malouf’s imagining of Ovid in his banishment, infantilized by exile.”

Hisham Matar could be Syrian, Iraqi, Afghani, or one of many more nationalities plagued by the refugee crisis. He is an adult product of war and politics, struggling with his identity. Thus his story is crucial to read and unfortunately timeless and still relevant today.