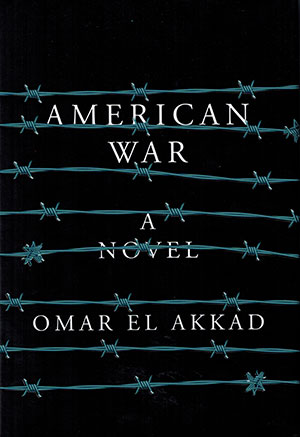 Omar El Akkad’s debut novel, American War, envisions a twenty-first-century United States that has been literally and figuratively reshaped by such forces as the climate crisis and globalization. Literally: as a map at the beginning of the book vividly illustrates, by 2075, major portions of the US have been submerged by rising sea levels. Figuratively: in the midst of a second Civil War, Americans in the secessionist Free Southern State find themselves more starkly than ever the subjects rather than masters of the global system. Inhabitants of a refugee camp in Mississippi are inundated with blankets despite the sweltering heat: “there were more blankets than anyone knew what to do with . . . yet the anonymous benefactors across the ocean in China and the Bouazizi Empire kept sending more.” Against a backdrop of devastation and destruction, such deftly observed incongruities make this reversal of fortunes on a global scale hauntingly palpable and plausible.

Told by a narrator who pieces together events that take place between 2074 and 2095, American War is not primarily a story about war but rather, as the narrator tells us, about ruin. While the novel’s premise—that a second Civil War in the US kills 11 million people, followed by 100 million deaths after a biological attack—postulates ruin in world-historical terms, at the heart of the novel is the relationship between the narrator, himself a historian, and his aunt, Sarat Chestnut, a rebel who fights and dies on behalf of the South. The narrator reconstructs Sarat’s life in her own words from the diaries she left for him. In the process, he is forced to come to terms not only with his aunt’s actions but with, as he puts it, his own “complicity,” a complicity that comes from knowing a story of the war that nobody else knows.

El Akkad powerfully transforms characteristics of our times—disruption, disunion, resistance, torture, terrorism, crisis, instability—into a carefully structured novel whose narrative is interspersed with journalistic accounts, historical testimony, and state records. After reading of his aunt’s involvement in several cataclysmic events of the war, the narrator struggles—and fails—to unravel conflicting strands of love, betrayal, devotion, and disappointment. As befits a novel about ruin, El Akkad takes an unsentimental, unsparing view of Sarat’s resistance. Ruined by her experiences in a prison run by the Northern forces, Sarat is told that she’ll be a hero to the Southern cause, to which she replies, “Fuck the South and everything it stands for.”

While El Akkad’s novel casts a jaundiced eye on the effects of power in a globalized world, Sarat is motivated more by a desire for revenge than by political ideals. The narrator can write this story only because he has had access to his aunt Sarat’s diaries. But faced with the destruction that defined Sarat’s life and times, the narrator eschews redemption and enacts his own kind of revenge: “On the day I had finally taken from the diaries all there was to take, I . . . set them ablaze. . . . I couldn’t help myself from burning them. It was the only way I had left to hurt her.” Scant on idealism, this novel asks us to face the consequences of living through fractured, fractious times.