The Sad Part Was by Prabda Yoon 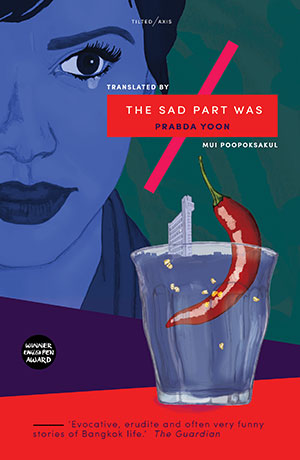 A schoolgirl struggling to see why one plus one equals two; a bus passenger writing with unusually large gaps between sentences; a young couple being too formal in talking but too casual in lovemaking; a traveler finding a secret from outer space and regretting it; a group of heartbroken men gathering to eat chilies in memory of their deceased crush—these characters from The Sad Part Was, a short-story collection by award-winning Thai writer Prabda Yoon, seem comically strange even for the local readers. Yet they are indeed more “ordinary” and easier to find in Bangkok than smiling Thais in traditional clothes, greeting tourists with the “wai” gesture in front of a decorative temple.

The book comprises twelve stories, most of which are taken from Kwam Na Ja Pen (Probability, 2000), a collection that won the S.E.A. Write Award, the most prestigious literary award in the country. In these stories, Thailand emerges as an urban landscape filled with contradictions. The old and the new, the sacred and the profane, the local and the foreign constitute the conditions in which its citizens live their lives. A striking instance is the protagonist of the book’s first and longest story. This creative director grows up watching the iconic 1931 Dracula movie in his grandparents’ DIY home cinema and later re-creates the bloodsucking count as a convert to Buddhism who is thus unaffected by the Christian cross in his own commercial.

Spending over a decade in the US before returning home in the late 1990s, the author probably found himself as much an outsider to Thailand as the international readers of this English translation. In his stories, the country’s social conventions are observed with a curious and critical eye, and the protagonists often find themselves caught in alienating situations even if they are natives. This outsider’s perspective introduces Thailand’s urban life and culture to the readers with intimate details not available in any guidebook. The role of women, the concept of seniority, and the implicit rules of etiquette are presented with a tongue-in-cheek tone mixed with deep sensitivity.

Yoon is acclaimed for his playful mastery of the Thai language. While it is barely possible to replicate his sense of humor and irony in another language, Poopoksakul, also educated in the US, makes up for it with witty English wordplay. Thai metaphors and idioms are given new lives, first in the author’s hand and then in the new linguistic context.

The translator’s rendition of the stories reads smoothly for anglophone readers. This readability is notably different from the original, which is a bit distracting since semantic and syntactic rules are constantly transgressed. In other words, the language is more refined, if less rebellious, than the original. Nonetheless, this trenchant observation of lives in a vibrant, alluring setting, elegantly rendered in English for the first time, definitely raises the bar for Thai literary works to be translated in the future.