Writing the Real: A Bilingual Anthology of Contemporary French Poetry 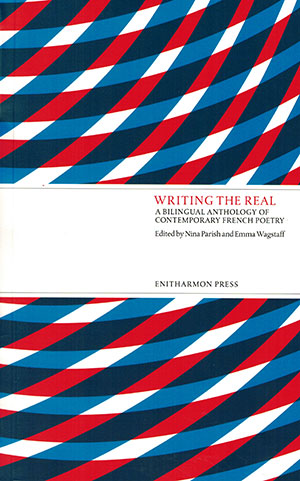 Considering the breadth of poetry contained within, Writing the Real is a relatively brief but highly dense collection. For those interested in the expanded possibilities of language that our present globalized and technologized world provides in terms of exploration and experimentation, the poetry encompassed in this volume of translated work is an exciting introduction to the contemporary French scene.

Populated by work from eighteen writers, many currently unknown in the English-speaking world, and some indeed new on the French scene as well, the poetry in this volume is identified not so much by canon or group but by the phrase l’extrême contemporaine (extreme contemporary). The work is vigorous and dynamic and challenges the conventions of traditional poetry, but the collection is also inviting to those unfamiliar with the genre. The editors of Writing the Real, Nina Parish and Emma Wagstaff, themselves immersed and generative in the community, have framed the compilation in a careful and thoughtful way so that a reader unaccustomed with the history of French poetry might dive into the texts on one side of the twentieth century and emerge into the present-day Paris scene.

In a selection like this, the introduction is as important as the poems themselves, serving as a roadmap through uncharted territory as well as a prescient survey of the future. Wagstaff and Parish guide the reader through a reflection on the recent history of French poetry, from mechanical lyricism to nouveau lyricism to littéraliste and beyond, creating a backdrop to the scene and inviting the English-speaking reader into the current dialogue. With only one poem (or extract of a longer piece) for the majority of the eighteen poets, there is time for the reader to have a deeper encounter with each poem and certainly encourages the reader to use the anthology as a gateway to further research. There is work from the forerunners of modern French poetry like Jean-Michel Maulpoix, Pierre Alféri, and Béatrice Bonhomme as well as newer writers like Stéphane Bouquet and multidisciplinary artist Anne-James Chaton (who recently formed a musical trio with Andy Moor and Thurston Moore of Sonic Youth). The work of these poets may split on style and expression, but the editors connect the work of the anthology through “the rich variety of forms that engagement with the ‘real’ can take.”

Politics, technology, performance, music, and multimedia provide an alternative reality to traditional concepts of poetry, and not one that is easily contained in a volume bound by the page. As the editors note, “Many of the poets included in this volume are creating poetic texts which migrate throughout other fields, genres and media, potentially redefining notions of the poetic.” References to collaboration, musicality, translation (or the possible-impossibility of translation) further complicate the work. Writers like Jérôme Game, who also translated the included poems of Christian Prigent and Christophe Tarkos, elude the static nature of the poem on the page with “stuttering live performances . . . ‘readings’ that disrupt words as they emerge.” Sandra Moussempès has presented her work Sunny Girls onstage in multimedia performances that incorporate music, text, and video.

It is worth noting that Writing the Real incorporates the work of a substantial number of female poets. This was a conscious choice by Parish and Wagstaff and marks a practice of ongoing importance in publishing. As they note in the introduction, “In France the reluctance of female writers to describe themselves in terms of their gender and resistance to being homogenized as ‘women poets’ has been matched by the entrenched preference of editors for male voices, and very few women have been included in recent French-language anthologies.” While diverse work can be found in journals and small presses, the introduction of French contemporary poets to an international English-speaking audience in an anthology marks an opportunity for a multiplicity of voices to be heard simultaneously.

Writing the Real is a considered, intriguing, and often challenging look at contemporary French poetry and ultimately an exciting introduction to a vibrant scene that can seem barred to non-French speakers. The collection itself is a dialogue with poets, translators, and academics as well as an invitation to the English reader to take a seat at the table.