The Red-Haired Woman by Orhan Pamuk 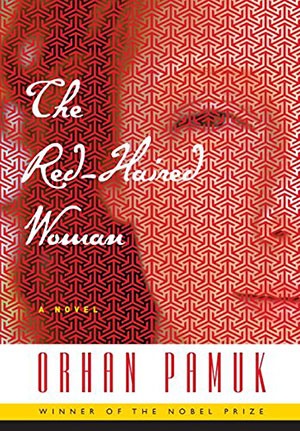 For over two decades, Orhan Pamuk has given us the courage to remember the distant and the recent past, in signifiers and colors invisible before. That is why it is no surprise that his new book, The Red-Haired Woman, happens to be about trauma and forgetting. Adorned with notions of the uncanny, The Red-Haired Woman is fearless in its reading of canonical texts like Oedipus Rex and Rostam and Sohrab and in tackling the question of patricide and paternal filicide.

The story, like the two novels before the Red-Haired Woman, begins in a 1980s postcoup Turkey. Cem, a sixteen-year-old high school student, finds himself in the middle of a family crisis. Abandoned by his father, he decides to apprentice himself to a well-digger. Already a fragile boy, he quickly gets attached to Mahmut, his master. Even though the job terrifies him profoundly, his yearning for Mahmut’s affection (şefkat in the original language) supersedes his fears, and he stays on the job. He also meets a red-haired woman, Gülcihan, an enigmatic and much older actress. Cem’s voyeuristic inclinations lead to an actual date with her, but unexpected events unravel and things ends prematurely. Cem’s affectionate and trusting relationship with Mahmut also comes to an abrupt and tragic end, leading to Cem’s hasty departure from the village.

The rest of the story follows Cem as he is transformed from an apprentice into a successful geologist, a wealthy business mogul, a married but childless man who is obsessed with the stories of Oedipus, Rostam, and Sohrab. Thirty years later, Cem returns to Ongoren despite ill omens, to discover his destiny and to meet Enver, the narrator of the novel. The entwined stories of fathers and sons take unexpected turns and proceed like the epics that have long shaped Cem’s life.

Pamuk’s readers will no doubt recognize the presence of his past works in this novel. Enver’s voice resonates with the assassin’s voice in Snow, Rostam and Sohrab’s story and the traveling theater company will bring back lines from the same novel; readers may find themselves hearing the cracking skull of a calligrapher in a sixteenth-century Ottoman well (My Name Is Red). Instead of the Venetians and Ottomans of the White Castle, it is Sophocles’ Oedipus Rex and the Iranian poet Ferdowsi’s Rostam and Sohrab that are gazing at each other, negotiating deep-seated fears about patriarchy in the East and West. Like Füsun, the red-haired woman, Gülcihan, despite her presence on the Turkish cover of the novel, is no more than a subject of desire. And Cem says his life changes after he reads a book on dreams, a statement that brings to mind the unforgettable opening sentence of The New Life.

Despite its familiarity, however, The Red-Haired Woman is a haunting and unprecedented novel. Pamuk’s mischievousness and playfulness are at a minimum, perhaps nonexistent. The murders in the book are sketched against a background of ancient epics and stories that create for the reader the illusion of a closed system, where one feels the weight of predestination and trauma in any troubled father-son relationship. Cem, who is a Poe fan in the story, immures himself with these classical stories, making the detective murder story within the novel even more evocative.

In his shortest novel to date, Pamuk leaves the reader with questions about his choices in storytelling and his late style. For instance, the changing of the book title from The Well to The Red-Haired Woman means giving up a perfectly Freudian metaphor that captures the subtle threads in the book. This relatively late change in the title seems to coincide with the inclusion of Gülcihan as one of the narrators in the story and Pamuk’s decision to have a woman amid heavily patriarchal voices. This dominant patriarchal tone is reiterated with the presence and inclusion of the Western canon, from Hamlet to Rousseau and Jules Verne. In this way, the red-haired woman exists as a mysterious, iconic figure, represented by a Rossetti painting, reduced to a book dedication, and caught up in an Oedipal net.